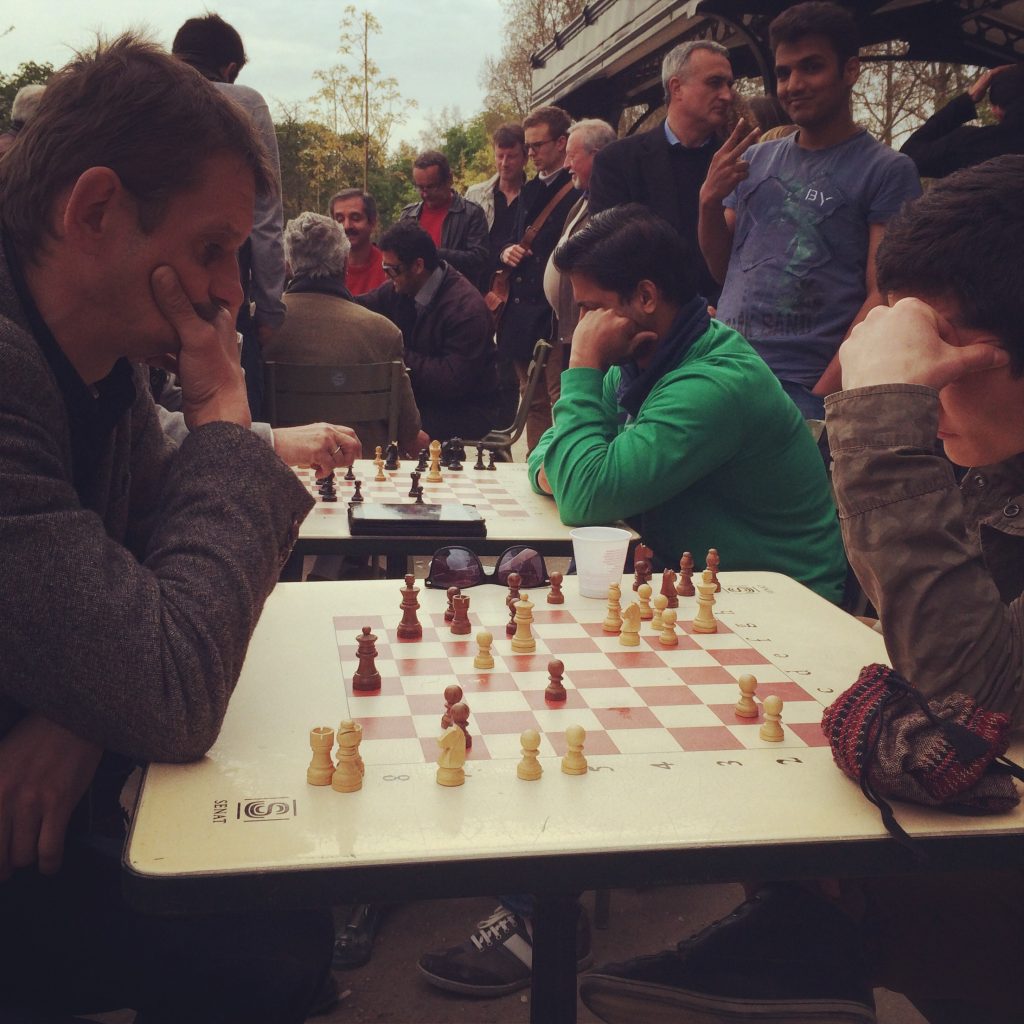 Meetup is a great website.  If you don’t know it, it is a site that allows you to create a group based around a particular love or passion.  Want to play bridge?  Or go hiking?  How about practicing your English and French?  All you want, and then some.

The burden is on the organizer.  He/she pay$ to start the group and is responsible for its ups and downs.  The better the organizer, the better the group.  I’ve started two groups here.  One for soccer inside the city (there are a couple of excellent groups that play in the big parks just outside the city…I can play soccer in a big field anywhere in the world.  But in front of Les Invalides?  Not too often.).  The other one is for chess, and has been pretty successful in its early days.  Our first get-together found 8 strangers from all over the world drawn together by a common love for the game of black and white squares, and the pieces that inhabit them.

That first meeting was at Anti-Cafe, a “co-working” space.  More on that another time.  A great time was had by all and we played timed and untimed games.  We also took time to school a novice on the rules and some basic strategy.

Chess is fascinating on many levels, and during the year I lived in Saint Louis I was a member of the Saint Louis Chess Club, which hosts the US Championship every year and where you can get tutored by grandmasters.

Basic principles beyond the names and movement of pieces are manifold, but here are three that I share with any fellow novice:

1.  Try to capture/attack the center of the board

3.  Try to consider each move through the two-fold criteria of what is this piece attacking and how is it attacked

These principles were on my mind last Sunday, during our latest meetup — our first outdoors — at the Jardin du Luxembourg.  After three successful meetups, where we had built up a strong core, I thought a fun tournament, with some euros on the line, might be fun.  5 euro buy-in.  We would see who would show up.

As a group becomes more carefully curated over time (again, depending on the organizer), the percentage of who signs up for an event vs who shows up may improve; my basic rule was 50%.  That is, if eight people said they were coming, then four people, at best, would be actually coming.

Today was a bit better.  Ten committed, including myself.  We had five plus myself actually show up.  There was an alleged “beginner” but as we played a quick game it became obvious he was just being modest.  I drew up a quick series of brackets that ensured everyone would play at least three games before we got to the final “money” matches.  It was imperfect for sure.  I had always played in well-organized round robins but as the sole organizer unsure of the number of attendees I hadn’t troubled too much with an elaborate schedule of matches.

Indeed, my focus (perhaps wrongly!) had been on bringing terrine, crackers, oranges, and vin rouge.  Who can play chess without drinking, surely?  But that is the least of the tournament transgressions we committed.

No one else had brought clocks so I loaned out my iPad and iPhone, both of which had chess clock apps.  The iPhone sadly gave up the ghost midway through the 3rd match, though the iPad lasted longer.  Some couldn’t play a timed match due to the paucity of clocks.

You also shouldn’t talk during tournaments, but the French are quite disposed to comment on everything, whether they know you or not, much less chess.  We were just a few feet away from the most popular players in the Jardin.  One of them was an old man with a grizzled salt-and-pepper beard.  The other was a man with palsy.

They played 3-5 minute blitz games, where moves were almost instinctive.  Winner stayed, loser walked.  Occasionally bets would be taken.  A group of 15 always surrounded whomever was playing — a variation on a nerd cage-fight.

Everyone was commenting on the game: some jeering, some offering officious (or kind) advice.  Players got into it also: “Allez, putain!”  I laughed heartily and leaned across to my adversary, “Les français sont très polis, non?”  He laughed also.

Tourists, taking in what had started as a beautiful day, continued to mill by even as it got overcast and slightly chilly.  I heard the snap and click of cameras and I wondered how my horrible losing positions might look on someone’s Facebook, captioned, as, “what a moron: mate in 7!”

I had placed four of the six players in “advanced” brackets.  Yves, the self-proclaimed beginner, and I, occupied the “knockout” brackets, where we would play each other and the losers of the upper brackets (As an aside, I love names like Yves and Ombeline that we just don’t have in English).

Some played faster than others and in between Yves and I’s second matches, some parents cooed their precocious children our way.  The children looked reluctant and somewhat embarrassés about their French “tiger mom” who would take them to the tables of the Jardin to make them play chess with adults.

We looked friendly enough, as usual my goofy American smile was the “over here” beacon that allowed a French parent to come over and ask, “peut-il jouer avec vous?”

“Oui.”  Chess keeps you humble, I thought to myself as I reached out to sake the paw of the (I guessed) 10-year-old, also remembering to switch all my you-singulars to the familiar.  Children and animals get the “tu” treatment automatically.  “Tu” though he might be I figured that no kid who was going to come play with adults was a slouch.  I expected to lose.  I’m only in the mid-hundreds in USCF ratings, after returning to the game in 2011 after a nearly 2-decade absence.

“He’s terribly aggressive,” I thought to myself as he brought out his Queen in move 8.  Yes, I had people asking me questions, people wanted to know who played next, my own vin to pour, bien sûr, but all credit to the kid, he beat me handily, in fewer than 20 moves (I wasn’t notating, but that’s a fair guess).  I was a bit distracted but he beat me fair and square!

His sister was playing a slower, less aggressive game against Prem.  “Be careful, ah?” I said with a smile.  “He beat you?” Prem asked, almost astonished.  “Oui.”

An English father came up and asked in halting French if his kid — who looked 8 — could play.  After a bit of discussion, I let the battle of les enfants terribles commence and I chatted with the parents.

“We don’t have anything like this in London.”  “Yes, it’s wonderful, isn’t it?  Put some beautiful boards down and people will come.”

There was a bocce ball “field” right by a park in my arrondissement at the Square de Batignolles.  It was often occupied by Italian expats who took their native game quite seriously, grazie mille.  Angry Italian spewed out whenever a teammate was supposed to have made a poor throw.  No angry Italian, or angry any language here, really.

We laughed and looked back at the game at hand.  “Your son’s quite deliberative.”  “Yes, well, I blame his coach.”  “You, no doubt,” I surmised.  He didn’t say anything.  He was analyzing his son’s current position.  The mother was being indulgent.  She wanted to move on after the first game but we encouraged them to play one more.

To keep her amused I switched into tour guide mode and told her a bit about the garden itself, its founding, and recent history.  “You love this place,” she remarked.  “It’s my favorite big park in the city, yes,” I replied.

The kids wrapped up, I wished them well, and I notified all my players of the final matchups, collecting the euros and placing them under the clocks of the respective games: 15 euros for the top winner, 10 euros for the next bracket, and 5 euros for the final bracket.

Aranya (giving the peace sign here) actually won the final between him and an elderly gentleman who went by the Meetup handle of “Whynot.”  Instead of taking the money and running, they went for 2 out of 3 and Aranya conceded the next two matches, and the 15 euros.  Why not stop? 🙂

Erkhem, who had only been knocked into the second bracket by one loss, took a bit longer to take out Prem.  They too played at least one more game, but Erkhem had the sense to confirm his winning after the first game.

Much of the food and drink I brought was uneaten (note for next time: food not so important for chess nerds) and as we shook hands almost four hours after we started, I promised more meetings for the months ahead.

3 thoughts on “Death in the Afternoon, or Sunday Chess in the Jardin du Luxembourg”