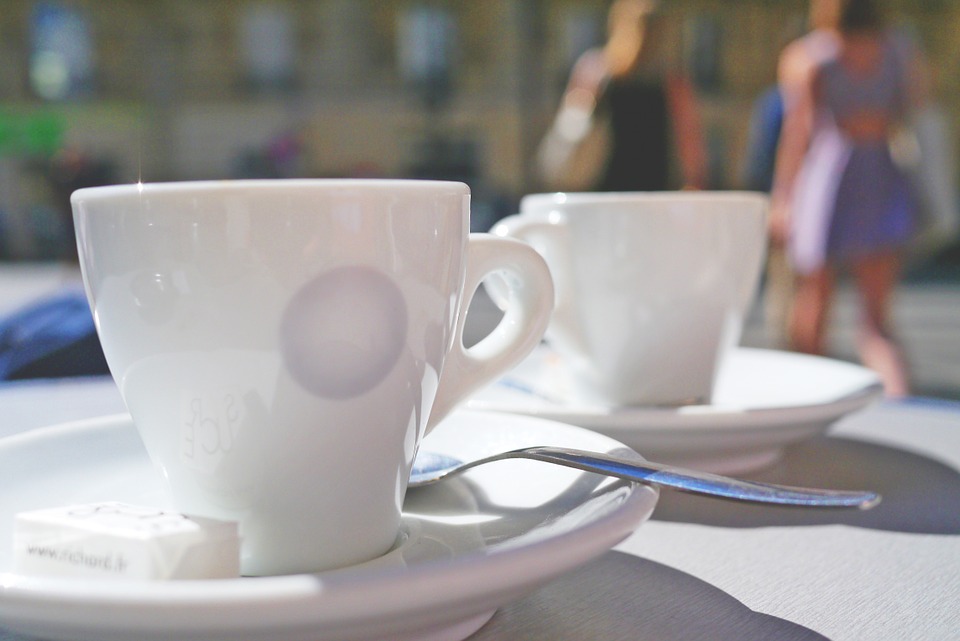 Matt was standing outside – about to message me – but I spotted him through the window.  I was working at Le Poncelet, my favorite cafe in the 17th, the arrondissement I spent my first year in Paris in.  I waved him in.

Le Poncelet for me is a perfect modern Parisian cafe.  It has trouble-free wifi, a great lunchtime special, usually around 12€ (and is sold out of by 13h00), and an unhurried manner that never makes me feel guilty when I sit and work there for hours on end.

Matt and I met for coffee at 10h00.  At 11h45 he signaled for another coffee and Anne-Sophie (one of the four waitstaff, who, in addition to the owner, I’ve come to know by name) politely told him in French that they were going to need our table for lunch.  Understandable: Paris cafes are a sort of no-go zone for the casual coffee drinker between the hours of 11h30-13h30 for the simple reason that the cafe wants to maximize dining revenue by using every available table.  You can always sit or stand at the bar during this time period – the prices are cheaper anyway – remember that an espresso at the bar might cost you 1€ whereas the exact same one sitting down might run you 2€.

Matt and I had separate plans to go elsewhere and simply work digitally after our coffee.  I needed to continue to move closer to the Louvre, as I was giving 4 guests a private tour there that night.  We were not far from the Champs and I picked a zany and open Starbucks location there where we might chat in peace and not be pressured into more coffee.

I ordered an Uber for us.  It came 2 minutes later.  I raved about how great the service is in Paris, and he reflected that his terrible experiences on Uber in our city may have been a result of always needing to order a van (he is married with three daughters).

We kept chatting at our new location – where we watched a professional panhandler do laps among the crowd, all with a fake crutch.  He occasionally helped himself to abandoned muffins and juice.  Finally a Starbucks employee chased him out.

Matt and I were continuing our conversation – we had long ago left visas and expat discussion, which was probably the original premise of the coffee (I love to meet my readers in person).  We were now into the area of monarchy (I’m a royalist) vs. anarchy (Matt is an anarchist) and I was making the case that both of these systems depended heavily on personal responsibility.

We had almost finished solving the problems of the world when I suggested we move one more time.  Again to a Starbucks (I’ve explained before how useful they are as lily pads), but this time close to the central tourism office near the Garnier Opera so I could buy the Louvre tickets I would need for my guests.

We commandeered two seats upstairs (where we had this view), and got to work.  Matt got the coffee, as I had gotten another Uber to catapult us here.

Ultimately, I wish that kind of luxury that Matt and I had that afternoon for all of you.  Yes, we had work to do, but, yes, it could wait.  We were having that kind of conversation – the kind that many of us associate with a fireplace or a holiday or preceded by a number of adult beverages.  We were stone cold sober, in the middle of a beautiful Parisian afternoon.  We were Americans far from our old homes, who had intentionally created lifestyles that meant we could have this kind of rich and thoughtful conversation on a random weekday – a true sharing of ideas, not in which either of us attempted to “convert” the other on particular issues but in which we basked in the challenge of seeing things from another point of view.

When was the last time you had that kind of conversation?  I reckon you’re overdue.