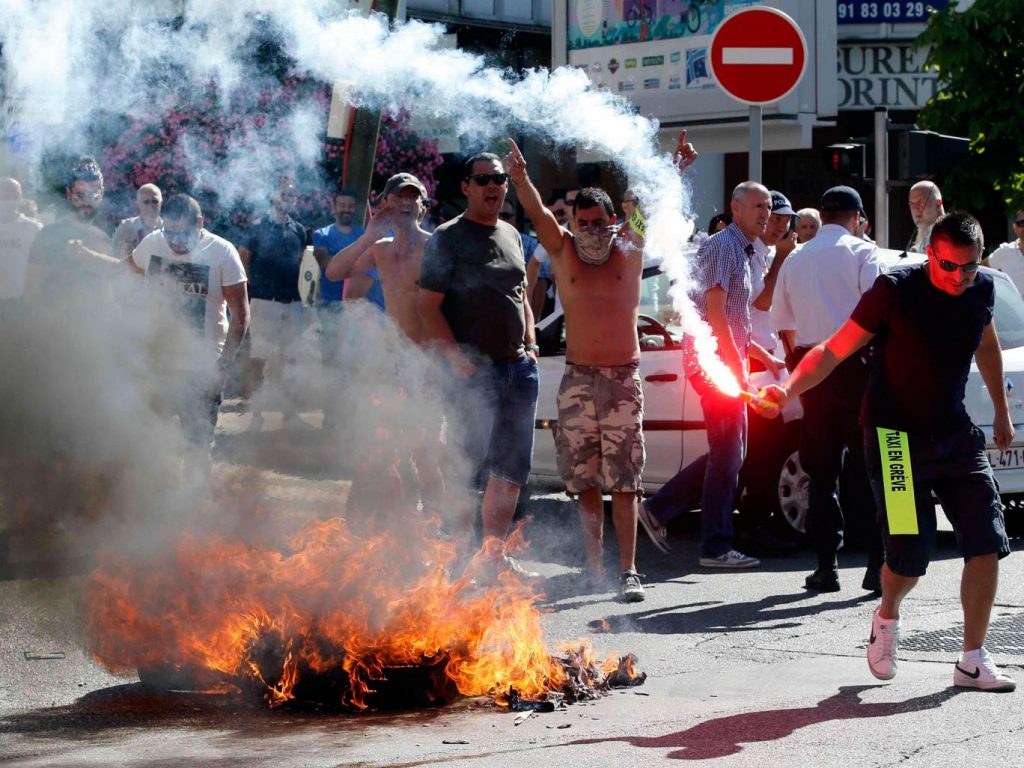 As a resident of France I appreciate that the French hold on to their traditions and ways of life and are generally skeptical of change.  Unmoderated and unguarded acceptance of change isn’t always the best thing.  Nowhere is this more a topic of conversation these days than with Airbnb and Uber.

These two American juggernauts have seized upon a simple idea and commercialized it: there is spare space in your home or car – if someone wants to rent that space for some period of time, and you are willing to allow them to rent it – you can complete an exchange of commerce.  Furthermore, in many cases, the necessary taxes are paid by the company, the provider, the end-user, or all three.  So what’s the problem?

In France?  “Les acquis.”  This term refers to the amorphous set of benefits and “rights” that the French feel broadly entitled to, and are willing to march in the streets to protect.  Not only (in their mind) are these rights guaranteed forever, but in all likelihood, these rights will only get better and sweeter with time.  I’m not going to talk about this concept for the moment.  I only want to use it as a reference point to help you understand why the hotels and taxi companies are absolutely livid about these two unicorns.

In a universe of acquis you have jobs and economic systems for life.  No pesky disruptions.  Year after year your universe is set and perfect.  Taxi-driving schools collect millions of euros in tuition and hotels collect hundreds of millions of euros in bookings. Never mind that both taxi companies and hotels employ tens of thousands of foreign workers and hence this can’t be argued to be about “French jobs.”

Indeed, it is a question of secrets.  In his book Zero to One Peter Thiel talks about the discovery of secrets as key to billion-dollar businesses.  The discovery of sharing unused space was a secret.  Overnight it created, in essence, the largest room-provider and largest transportation companies in the world.  Not by a massive capital spend, but by really intuitive software that could connect the provider and the end-user.  This massively democratizes micro-entrepreneurship by lowering barriers to entry.  You would think this would be welcome in a country that carves “liberte, egalite, fraternite” into the stonework of their buildings.

And yet, the French, used to the idea that anything you do with your time for money has to come with an enormous raft of benefits, including 2 years of unemployment pay, burn and flip cars and raid apartments in protest.  Who are they hurting?  Uber and Airbnb have more money, time, focus, and brains to devote to winning this matter legally – or they will simply pick up and leave.  In the meantime, people who own cars or apartments in Paris who are simply making some money to defray their costs of ownership, as well as everyday commuters and travelers looking to save money, are the ones actually penalized.

Despite the fact that “entrepreneur” is a French word, fundamental disconnects like this happen.  Entrepreneurs don’t get acquis.  We build our own acquis over time, with hard work, perseverance, and a tremendous amount of sacrifice.  No one forces us to do it.  We provide willing services to those willing to pay us – we’re even happy to pay taxes…to a point.

It is the convergence of these two attitudes – the inbuilt idea of acquis and a population that prefers guaranteed jobs for life to entrepreneurship (because they are fundamentally risk-averse) that leads to such a strong pushback against these services in this country.

And yet, it seems to be politically motivated.  Many of the people my age (and younger) actively use Airbnb and Uber here in Paris.  We know what hotels are and we know what taxis are.  We have used them, many times.  We also know that airbnbs and ubers are neither hotels nor taxis, and come with their own risks (as if hotels and taxis are risk free!).  But we understand that it’s important for people to have lots of choices.  Transportation-wise, that’s what makes getting around easier: buses, metros, taxis, ubers, bikes, scooters, and yes, walking.  Indeed, Uberpool is even an innovation among taxis – using intelligent software and gps to save everyone time and money.

And yet, despite a multi-million euro settlement with Airbnb last year, the City of Paris is being pressed by the hotel lobby for more raids.  And the ride-sharing industry is under pressure after a recent taxi strike.

In English we say, “the cat is out of the bag” to say what has happened has happened, and that you can’t go back.  Parisians have discovered that they can make money renting out their homes and cars.  Hotels and taxi companies have discovered that their guaranteed monopolies are over.  The City of Paris is caught in between them.  But the secret is out, and the hotels and taxis are in for a very rude awakening should any real move be made to ban Airbnb and Uber in Paris.

The photo used comes from the Independent.

This article was also published on Medium and LinkedIn.