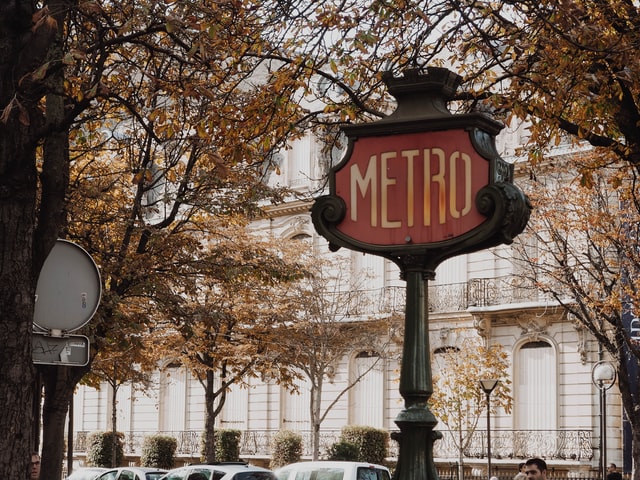 In any city in which there is a well-established mass-transit system there will be an enormous group of people going about their daily lives without clogging the streets with extra vehicles.  This makes sense for our planet, for their pocketbooks, and for our traffic sanity.

Paris has an excellent system of buses, trams, and trains — when the dear people who operate them aren’t on strike.  Now, mind you, they are not often on strike, but that kind of interruption, along with train breakdowns, station closures, or just plain crowded carriages are things that you need to factor in when planning your travel in Paris.  There are a few other things you should keep in mind as well.

1.  Don’t overly rely on the Metro

Paris, after all, is a city that deserves to be walked.  The sights, sounds, and smells — good and bad — inform your experience, and sometimes tourists develop a point-to-point mentality of the Metro so that they get to know the cavernous (and not particularly attractive) underground of Paris and miss the lovely passages (alleys), rues (streets), and boulevards.  Don’t be overly reliant on it.

“Step-free access,” as it’s known, is still developing in the metro system, though it gets better and better every day.  The vast majority of stations have neither an elevator nor an escalator for your ascents or descents.  As stations get upgraded these are become less of a rarity, much to everyone’s relief, particularly parents with strollers or those in wheelchairs.

Some people say to completely avoid the Metro from 08h00-10h00 and from 16h00-19h00 and I understand why.  But if you’re visiting Paris it doesn’t make sense to force yourself to avoid the rhythms of our daily life here.  Make your plans and simply deal with the crowds if you need to be on the metro during those times.  You will get some appreciation for what we experience as Parisians and you will definitely be “immersed” in the Paris experience.  You’ll also push (or learn) your boundaries of comfort, and that’s always worth doing.

Don’t be afraid to ask the kind person at the desk for help.  Remember to always say, “S’il vous plait, parlez-vous anglais?”  They will usually say at least “a little” and you don’t need a discourse to get your answer, usually.  If the answer is “Non” try to explain using a metro map (always free) and using gestures.  You didn’t play all those games of Charade for nothing!

5.  Be yourself, but be watchful

You don’t need to turn into a paranoid person because of fear of pickpockets.  I remember my first visit to Barcelona, where I had been told that Las Ramblas was essentially a den of thieves.  After being ultra-paranoid my first day, because of this advice, hardly enjoying myself as I took in that walk down one of the quintessential streets of Barcelona, I remembered that my relevant documents and devices were not in places where they could be snatched off my person in broad daylight.

Instead of paranoia, opt for awareness.  We have thieves here, as does any major city, but you’re generally safe in most parts of Paris.  If you are keeping valuable items in your pockets, keep your hands in them at all times and try to stand in a place in which you have your back to the wall or a door so that no one can reach behind you without your seeing it.

Paris is one of the cities featured in the amazing and free Citymapper app (available on iOS and Android), so use it instead of Google Maps to get many more options of travel, not just in the metro, but across multiple modes, like shared bikes, scooters, and rideshares.  If you are walking or biking you can also opt for “quiet/regular/fast” routes to adapt your journey to your mood and schedule.

Enjoy the convenience of the Metro which will whisk you around the City of Light significantly cheaper (and often faster) than private transport could ever dream of.  While our system is not as clean as Singapore’s nor are our trains as modern as London’s, the Paris Metro is a world-class system with almost smothering coverage of all 20 arrondissements. It is easily one of the best in the world for utility and price.

Photo by Anastasia Zhenina on Unsplash

One thought on “The Paris Metro: 6 Things To Keep In Mind”