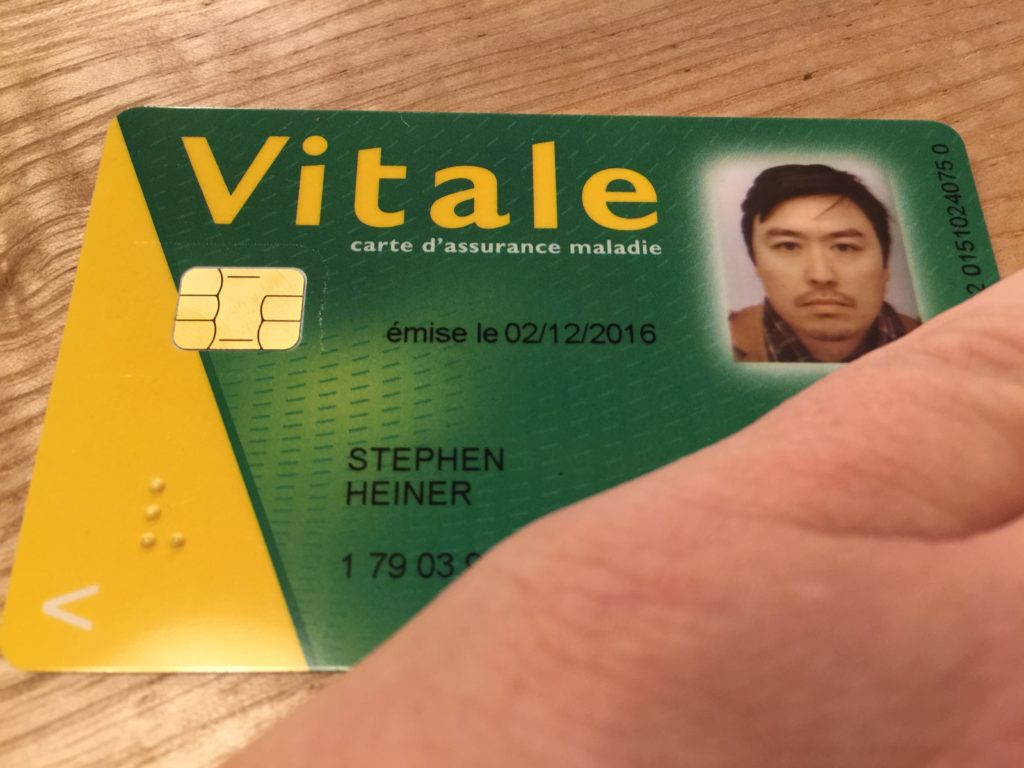 It felt futile. I knew the French didn’t operate this way, but I was feeling worn out and was reverting to American habits.  I was writing, in French, on a post-it note, the following message:

“I am very happy to send another yet another check to cover my health insurance charges, but I still have not received my Carte Vitale.”

I knew as I sealed the envelope that some French functionary processing my cheque would see this note, laugh scornfully, then peel it off and place it delicately into the circular file.

So you can imagine my surprise when, one week later, I received a letter in the mail letting me know the only thing missing to process my Carte Vitale was a photo and my signature, after I had verified some information they had on me.  It is one of those times I was quite happy to be wrong.

This was the only part of my paperwork processing that had gone sideways as I left visitor status and transitioned into my profession liberale life.  But, since I’m not a frequenter of doctors anyway, it simply remained a slight irritation.  When four months had passed without any sign of my Carte Vitale, I made a copy of my translated birth certificate, as well as a copy of the original, and sent it to RSI with a pleasant cover letter.  No reply.  Another four months passed.  That’s when the wry (but polite) post-it note was written, which just goes to show you that every now and then an unexpected tactic might just work.

The visit to the doctor felt like an interstitial in an Inspector Clousseau skit.  I had crowdsourced a good doctor from my Paris network, one who had a decent command of English, though I made the appointment in French.  I made the mistake of not asking how to find the place (surely an address is good enough?) and when I walked into the vestibule of the apartment building that was the address for my doctor, I searched in vain for signage that would indicate my desired destination.

Not quite willing to admit defeat yet, I decided to climb the stairs (surely the doors will be marked?).  But by the time I reached the 3rd floor (American 4th) I realized that this was a fool’s way to figure things out.

Humbled, I turned around and went all the way back down the stairs.  Thankfully, on the ground floor, a resident was having her door locksmithed and I asked if she knew where the “medecin” was (on a side note, “doctor” is one of those words in French that doesn’t change ending whether you put a “le” or “la” in front of it).  She responded insouciantly (as if she gets this all the time) that “all the doctors are on the 5th floor.”

I took the elevator up to the 5th floor, found her office and checked in, roughly ten minutes after my original appointment time.  Ten minutes after that, I heard a gentle, “Monsieur Heiner, S.V.P” from the hallway and went in.

Her room was cheery and welcoming and full of books.  I felt like I was in a comfy study, not a doctor’s office.  She took out a clean sheet of paper, wrote my name down at the top, drew a straight and clean black line under it, then looked up at me, smiled, and asked how she could help me.

“Puis-je parle avec vous en anglais?” I queried.  She smiled down her glasses at me.  “Yes, of course.”  “I just don’t have the vocabulary to speak well about my health in French.”  She nodded.

Ten minutes later she was asking for my Carte Vitale and 40€.  The carte goes into a card reader just like a chip-and-pin card, but with no pin.  “Cash or cheque?” she asked.  “Oh, you don’t take bank card?”  “Non,” she gave the slightest of pouts and shook her head.  “Is this the case for all medical appointments?” I asked.  “Non, it is a choice,” she said.  I had just enough cash on me: “You cleaned me out,” I laughed.

On the way out she handed me a form which designated her as my “medecin traitant” which in American parlance is “primary care physician.”  Getting this form to La Ram/RSI would make sure I got properly reimbursed.

I was off to the lab after that for some testing and I thought I had understood her directions about how to get there (it was in the same structure, just down a different hallway) and 7 minutes and a few dead ends later I was in front of the receptionist at the lab.  Twenty minutes and roughly 10 glasses of water later, I was prepared for my lab work.  When it came time to draw my blood, the nurse gazed at all the vials which had been set aside for me (around 11) and asked if there was a reason I needed all the tests.  I responded in French that I hadn’t been to a general doctor for 2-3 years and I figured why not check on everything?  We both laughed.

I went back to the waiting room and five minutes later the receptionist called me.  A swipe of my Carte Vitale and 80€ on my bank card later, and I was done.  I went home, dropped the form for my new “medecin traitant” in the mail, and went back to my day.

Two weeks later, to the day, an envelope arrived in my mailbox.  I had completely forgotten that I had some money coming back.  There was a check for 15€ against the 40€ I had paid for the visit, as if even 40€ was “too much” (as an aside here I’ve mentioned in the past that you can acquire a “mutuelle” policy that tops up even this copay so you are 100% reimbursed all the time, but I don’t go to the doctor enough to add that extra cost to my budget).

My first encounter with the French medical system: easy, painless, friendly, efficient, and inexpensive.  Against the roughly 700€ a year I pay to cover my national health insurance, not too bad.