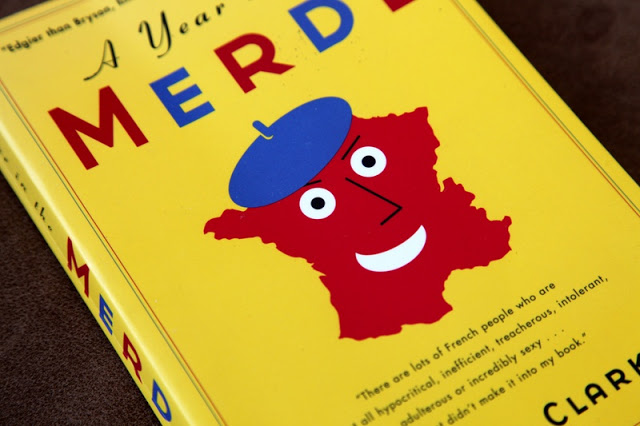 I read a lot of books about Paris and France before moving here and I’ve only recently realized I might do well to share them with you.  So, I’ll start with an old favorite.

It was the second week I was in Paris.  I had just gone to an Asterix exposition at the ugly BNF (Bibliotheque Francois Mitterand), with my friend Julien, who I had met in Adelaide, Australia, a year earlier (a story for another time).

“Stefan,” (this is how the French pronounce my name), “Stefan, do you know zis booke, ah, a year in dee Merde?”  I nodded that I had vaguely heard of it, but not much more.

He started laughing.  “Oh, you must read it!  It is soooo funny!  And it’s true!”  Julien is a great guy – a real anglophile to boot – though he insists that when we go on ski trips I only speak French – so I gave his recommendation its due importance and in time purchased and read the book.

It was, as he had warned me, absolutely hilarious.  One time I almost choked on my tongue while reading in the metro because I was laughing so hard.  Another time, while I was buying groceries at Franprix, I noticed that the checkout guy started to giggle quietly because he saw the book under my arm.  “C’est vrai?” I asked him, left eyebrow raised.  “Oui – tous!” he responded.

So, Stephen Clarke, the author, invented this fictional Paul West character who comes to Paris for a job and gets caught in the life of apartments, work, and love.  It’s told from an anglo perspective, and it’s particularly funny if you’ve lived in Paris for any period of time because the jokes hit on the realities of everyday life.  Some memorable lines from the book include:

“Jean-Marie did the hugest shrug I’d ever seen, even outdoing the man in the electric shop.  His shoulders, arms, his whole rib cage, took off vertically in a gesture of infinite indifference.”

“The Paris police are the best in the world at one thing – sitting in buses.”

“Red lights are like queues,” he said scornfully, “They are for people who have time to waste.”

It’s not a perfect book, by any means, but it’s very revealing in its takedown of the French.

Clarke was a bit taken aback, I’m sure, by his success, and has gone on to write at least two other books on this theme, which I have, unfortunately, also read.  I say unfortunately because these books go beyond the playful fictional satirical conceit of the first book and just linger in stereotype that is, over time, increasingly unfunny.

Yes, it was funny that first time – but if you want to keep going you’re going to have to go deeper.  In comedy, the analogue would be the first Austin Powers movie – the first one was funny in so many ways – the others were horrible.  Same with the sleeper Liam Neeson hit film Taken.  I love that movie.  Which is probably precisely why I hate the sequels so.

Perhaps we as moderns don’t understand that success can be solitary (witness Harper Lee being huckstered into releasing an inferior and revisionist novel in her dotage).  Success doesn’t mean having to repackage your great idea as something only slightly different.  Indeed, success is sometimes leaving well enough alone.

So, read this first one.  Skip the rest of Clarke’s catalogue.