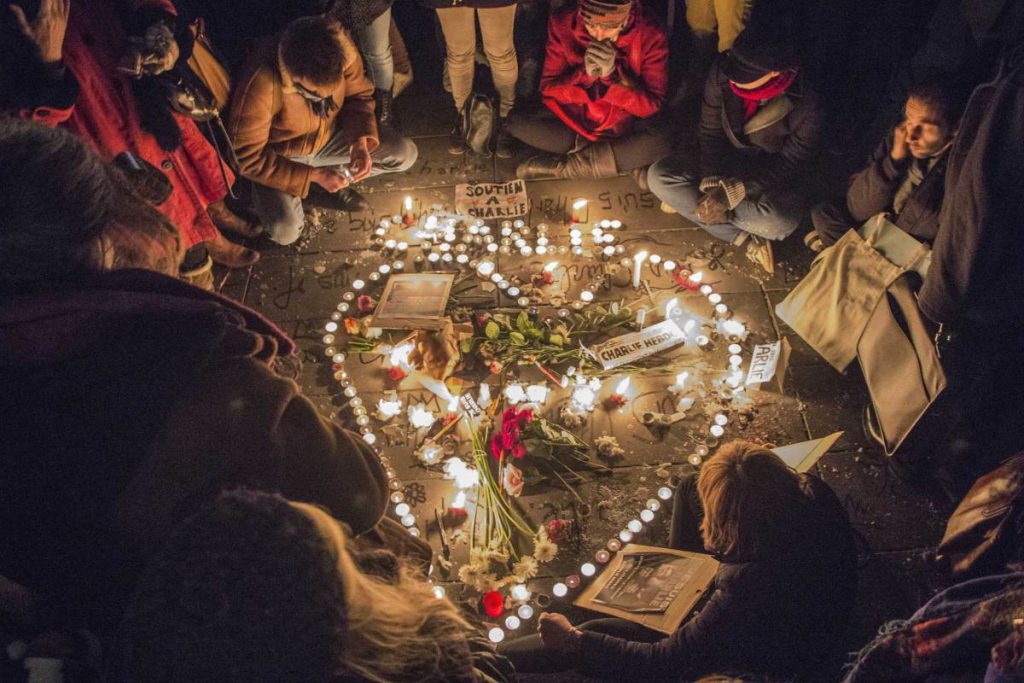 This shrine, among others, was set up around Place de Republique this evening.  I had used the spot as a convenient place to meet two friends before dinner at my favorite Cambodian place in Paris.  I had completely forgotten Republique’s status as a shrine for the Left (there is a huge monument to “Liberty” in the middle of the square) and since I had not been avidly following the Charlie Hebdo news, I didn’t realize how decked out it would be: candles, pictures, drawings, graffiti.  People had plastered bulletins of Voltaire mouthing the now eponymous, “Je suis Charlie” all around the monument.  The devotion reminded me of a much smaller “shrine” in the largest cemetery in Paris, in Pere Lachaise, at the grave of Oscar Wilde.  When I first gazed at all the lipstick marks at his grave, I felt the same feeling I felt just a few hours ago witnessing all the people milling around the monument, around all the reporters doing stand-up interviews with whomever was around (hopefully you would be holding a child, showing that you were “teaching” your kids how to “stand up” to violence): bemusement.

While I will be the first to admit that I’m not the most empathetic of souls, I did feel the normal disgust at a senseless loss of human life.  Any civilized person would.  But then there’s what comes after.  Would I stand up for or march in “solidarity” with “free speech,” for a disgusting magazine, and for a national security policy that is essentially tone-deaf to the unique and challenging situation that is militant Islam (hopefully France doesn’t call it “workplace violence“)  Quite definitely, non.  If I’m going to march it’s not going to be to soak myself in some gooey sentiment of “solidarity,” but because I truly and deeply believe in something.  Because I would be willing to be tear-gassed and arrested for it.  Was I going to march for people who taunted Muslims with outrageous cartoons?  No way.  But before we even get to that, I suppose we should address what this is being universally painted as: an attack on capital F, capital S: Free Speech.

The media and governments and many of the “Je suis Charlie” drones (some of whom I count as friends!) push the idea that this was an attack on free speech.  I dispute that, but I suppose I should admit at the outset that I don’t accept the notion of free speech, either intellectually or practically.  It’s gospel to many people, as certain a value as 2+2 equaling 4 or the sun rising in the east, but to me it’s an abhorrent and dishonest modern fantasy: something that protects the prose of a child molester extolling the virtues of pedophilia in the same manner as that of a nun speaking about outreach to the poor and abused.  In a nation (and city) in which egalité is literally carved into stone, the idea of many ideas having “equal value” resonates – but perhaps because it is taken for granted it is never truly scrutinized.  “Free Speech” is a lie the West tells itself, and then is shocked when others don’t accept it as gospel truth.

So there’s my first stumbling block to the #jesuischarlie movement: I don’t accept the so-called “Western value” of “free speech.”  I think that there are ideas that are dangerous and words that are beyond the most foul and disgusting and rather than buy into a system where I accept that all ideas are equal (something I can barely type!) I accept that some things are beautiful and should be protected and some things are vile and disgusting and should be discarded.  The cartoons of Charlie Hebdo fall into the latter category.

That’s the second problem – while I find their cartoons disgusting (I cannot even bring myself to describe the Christian “satire” that this rag of a publication has served up) I do not believe that their pictures should have carried a death sentence.  But I do think the editorial staff knew what they were doing and in the French tradition of “brave journalism” were “daring” to do things that upset people, and they knew what might happen.  A true “Western value” (read: values derived from Christianity) is respect for life and we try, prosecute, and in some places in the world, execute murderers.  We don’t tolerate the wanton murder of people.  Yet, saying Je suis Charlie precisely means you are standing up for the disgusting values this magazine propagated (calling the magazine the French version of the American Onion is not just American oversimplification at its worst, its simply inaccurate).  Saying “Je suis Charlie” extends beyond the borders of empathy for the murdered to solidarity for their work, which was, at its very best, highly questionable, and at its worst despicable and wantonly provocative.

Finally, “Je suis Charlie” insouciantly marches with banners of “we are not afraid” while failing to examine the real problem: militant Islam.  NPR Americans whose “Muslim friends” eat bacon will tell you that Islam is a religion of peace, but those who have read history, have actually read the Koran, and know the violent arc that is the founding and ongoing mission that is Islam know otherwise.  When someone in New York whose name isn’t even remembered does an art exhibit depicting a crucifix in a jar of urine, does anyone fear reprisals from Christian terror groups?  No.  Because there aren’t any roaming around or training in special terrorist training camps!  There isn’t anything in the Christian New Testament that instructs Christians to convert people by any means necessary, up to and including the threat of murder.  This week France, when confronted with an Islamic terrorist attack, reacted the same way that England and Spain did when they experienced their own attacks in their own cities: explained how this had nothing to do with Islam, took no responsibility for military policy in the Middle East that stirred up such hatred and violence, and then pivoted to say this is a “terrorist” issue, without taking the time to point out this is a uniquely ISLAMIC issue.

Something that the West does well, for better or for worse, is tolerance.  We may not agree with you and may even disagree with you on fundamental human matters, but we will live in peace with you as long as you observe our laws.  The people who committed these murders trained in places where it is a crime to possess a crucifix!  Western governments have the opportunity to take a long hard look at this and ask if this is a problem of “religious fundamentalism” (something bland and generic that implies there could be such things as buddhist terrorists or hindu terrorists that are operating on even a fraction of the scale of Islamic terrorists) or of “Islam and the West.”  Those who’ve read history know that the Muslims tried and failed dozens of times over centuries to militarily invade Western Europe, conquer it, and put it under the Crescent.  It failed, perhaps most famously, on a 9/11 few know about, the night in 1683 when Jan Sobieski, King of Poland, arrived at the gates of Vienna to successfully repel the Muslim invasion.

The Muslims are no longer at the gates of Vienna.  They don’t need to invade Europe because they are already here and they will simply not permit “free speech” that mocks their religious beliefs.  You can say what you want about these men, but they truly believe in what their religion professes in its scriptures.  As for the West, it has to decide whether it will keep pretending to be shocked when these things occur or actually start to formulate public policies that take into account the realities of Islam instead of the lies we tell ourselves about that religion.  The march tomorrow blithely ignores that reality, preferring instead sentiment and tears.  There is a time for such things.  Then there is the time to fix public policy so that such things don’t happen again.  Je suis Charlie sure is catchy, but it doesn’t even begin to address any of the problems this horrific event has laid bare.