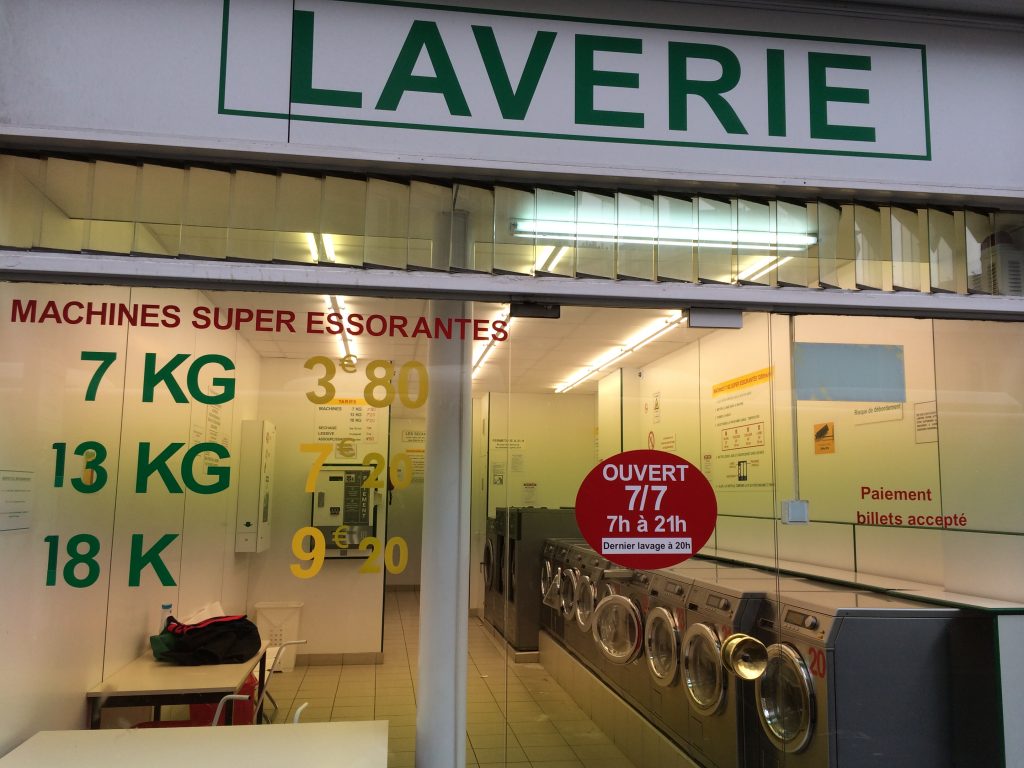 Sometime back my landlady had offered to do my laundry…for a fee, of course.  I’ve been doing my own laundry for many years now — but usually at my own home using my own machines.  I never had any mental measurement other than “large” or “small” load.  Even during my last foray into city living, when I lived in Lafayette Square in Saint Louis, I had washers and dryers in the basement of the 100-year-old Victorian I made my home.

“How many kilos?” She asked in her native-Parisian accent.  I laughed.  I thought about my sack of laundry upstairs.  “What would that weigh,” I asked myself.  I figured 8-16 lbs, which came out as…”Je pense…quatre kilos.”  She took a minute to do the math, add on her service charge and told me “25 euros.”

It’s not polite to haggle in residential situations here — even less polite to imply that you are being ripped off — but let’s say conservatively I would be talking about $30 (she was asking for more) and let’s say I had proposed ten lbs (which ended up being about right — I should go into mental clothing-weighing!) that’s about $3/lb.  Was that expensive, I wondered?

Since I was in a situation in which I should simply say, “oui,” I did so and trudged upstairs to my apartment to grab the bag of laundry.  Was that a lot?  We as Americans often overlook sunk costs — machines had always made sense for me not just because the hookups were there and used washing machines can be had for a song (some guy nabbed my washer and dryer when I moved for $150 — not bad when you consider I had bought them two years earlier for $200), but also because I invariably rented to tenants, who saw a washer and dryer as an awesome amenity.

By the time I handed the laundry bag to her I had done the math: $360/year, assuming a ten-pound load/month.  That didn’t seem so bad, I thought, but surely I could do better (as a postscript my landlady brought my bag of laundry to my apartment, not realizing it hadn’t been folded.  I was surprised to find it rumpled but I wasn’t going to take it back downstairs and demand it be folded.  I happily folded it myself and she was so embarrassed to find out later — via the cleaning lady, who was quite upset about it — that she didn’t charge me.  So this comparison is now officially just academic.).

It would be six weeks before I would need to do laundry again.  Bachelors inevitably mark laundry as the day before we run out of underwear.  This time I had a number of scarves that I needed to go in the delicates so I broke my laundry into two machines.  Again with the kilos.  The instructions were fairly straightforward.  I bundled up what needed to go and I brought my 11kg — over 20 pounds — to the laverie about 1000m from my house (I know, stay here long enough and you even start using Celsius to talk about temperature).  It was found with a bit of work as neither yelp nor google places responded well to lavanderie or lavérie (well, I did get one search result nearly a mile away.  Nope).  Google asked if I meant “lavanderia.”  Sure, maybe it’s Spanish day.  I clicked on the link and got…nada.

As you can see the instructions were fairly straightforward.  You need to make sure you put your detergent into the wash (lavage) not the pre-wash (prélavage).  I paid 7€20 for the 13kg machine (most of my stuff) and 3€80 for the 7kg machine (scarves and stuff).  11 euros all together.  Then, when they were done I dried both loads together for 30 minutes (the dryers are HUGE and efficient) — another 4€50.  Let’s say 16 euros in total to do it myself.  In opposition to the rate my landlady proposed (why didn’t she just let me do it myself, I wondered) I had done twice as much laundry for 1/2 the price.

But I still hadn’t figured out whether this was “expensive.”  Yes, I didn’t have the sunk cost of a washer and dryer, nor the utilities that went with it.  17 euros for let’s say 14kg was a little over 1 euro/kg, plus detergent (7 euros for a bottle that would last me over a year).  $1.30/2.2 lbs?  Or 65 cents/pound.  Yeah, it was cheap.  There are expenses to living in any big city — including Paris — but laundry wasn’t going to be one of my big ones.

The photo is of the laverie where I had my first Paris laundry experience.