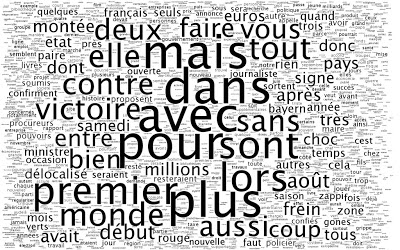 Americans abroad sometimes beat ourselves up — often on behalf of our fellow countrymen — other times because of our own perceived shortcomings.  One of these is the famous lie: “Well everyone in Europe speaks at least 2-3 languages fluently.”  I’ve found this to be mostly a myth, for any number of reasons.

It is true that Europeans take up a 2nd and sometimes even a 3rd language outside of the language that they speak at home.  But Europeans are humans, like the rest of us, and fluency is like anything — once attained, it must be maintained.

On the ferry from Morocco back to Spain some years ago I struck up a conversation with a Danish family.  We talked about socialized health care (Obamacare was much in the news at the time) and came on to education.  “What is she learning as her third language?” I queried.  “German.”  I was surprised — I know they are geographically proximate but German is really only spoken in a couple of countries.  I didn’t want to ask why so I simply asked how she was doing.  “Ask her,” the father smiled.

“How’s your German?” I asked the 11-year-old.  She answered haltingly in her 2nd tongue, English: “I…it’s okay.”  “Do you practice with your friends who are also learning German?”  “No,” she admitted honestly, making a face that betrayed only slight shame, almost as if to say that practicing a non-native tongue with friends learning that same non-native tongue would be unusual.

Fluency, strictly speaking, is the ability to converse quickly and at a high level, within a language.  Fluency comprehends a large vocabulary, appreciates and can deliver puns, and has fun with wordplay.  It also has the ability to engage in high-level discussions — say about the existence of God or the start of the universe.  I would never call someone fluent in a language who kept asking me the word for “planet” or “cosmos” or “uncaused cause.”

I might call them conversational — those who can express themselves enough to order food, ask for directions or talk about basics about themselves.  Sometimes this brings with it a semi-literacy — an ability to read signs and some announcements, but not enough to read an editorial in the local newspaper.

My most recent trip to Vienna left me with a few new friends, one of which was now a teacher in Vienna who confessed to me during our 30 km bike tour of the city that he had learned Italian and English in school but had lost them both.  I told him quite emphatically that his English was very impressive despite his not being a regular speaker.

While a big part of my mission during my time in France has been to attain fluency in this language, I have over the years come to appreciate even knowing a few words in any language.  The doors to another culture can open themselves so widely in just a few words.  We talked about the fact that the ß (eszett) in German is not often used.  “Indeed,” he replied, “the Swiss use a double s in its place.”  This is true, the Swiss are quite practical.  They use septante and huitante and nonante to denote 70, 80, and 90, respectively.  What do the French use?  soixante-dix (60 and 10, literally), quatre-vingt (four twentys, seriously), and quatre-vingt-dix (yup, four 20s and a 10, like you’re counting out change).

What I mean to get at is if you cannot attain fluency in a second language (or a third, etc.), don’t beat yourself up.  Many claim fluency in a second language, but what they mean is that they are conversational.  Someone who can seamlessly transition from language to language, preserving an accent native to that language, is rare.  And they are probably in diplomatic work.  The rest of us make do with “comment dit-ton” until we can get there.  And hey — what’s the harm in working on fluency in your native tongue?  I daresay we’d see better grammar and spelling in our business and personal emails if we put that effort in! 🙂

5 thoughts on “The Myth of “Fluency””