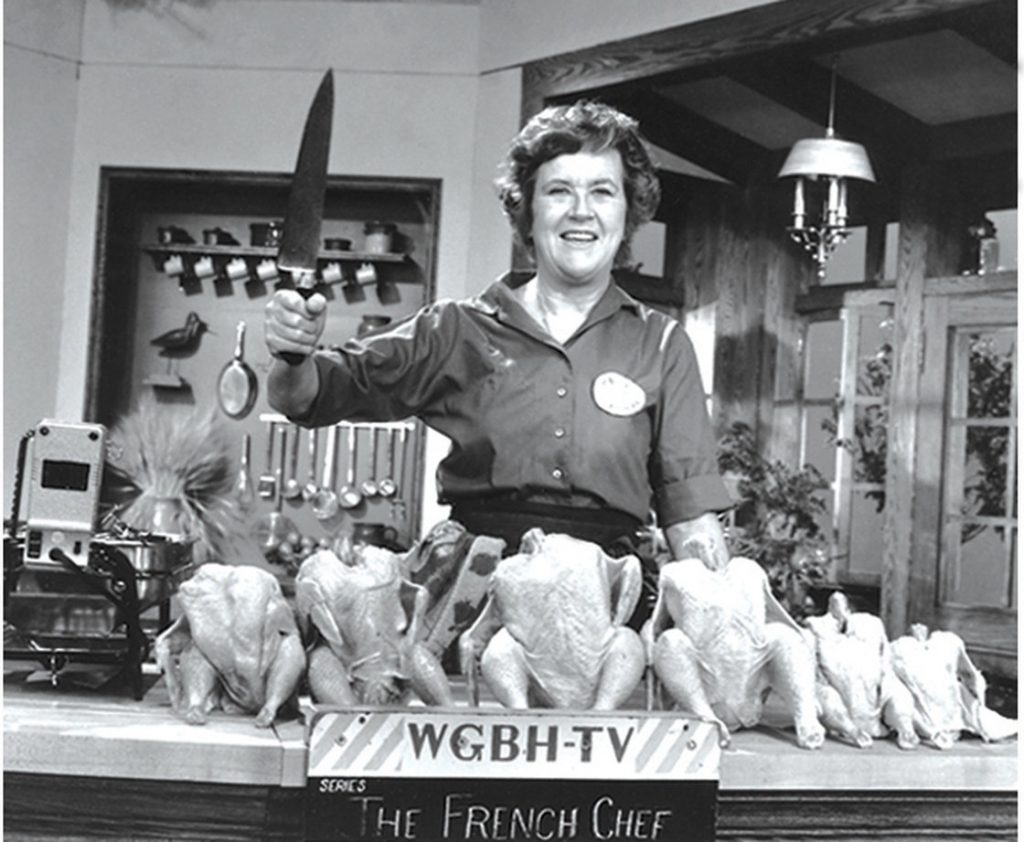 Julia Child is best and rightly known as the woman who brought French cooking to America in an accessible and sensible way. You may know her through her recipes and her famous TV show, but this book, My Life in France, is all about the woman herself — her life in Paris and Marseille, and other places throughout Europe as WWII ended and the Cold War began. You would hardly guess that she worked for the OSS, which was the forerunner of today’s CIA — but in a way that’s believable as she really did “infiltrate” into an American kitchen that was focused on frozen foods and items you could make out of a box or tin.

It was also fascinating to hear her describe the French and their ways — it reads like it could have been written today, even though Julia is describing post-war France, almost 60 years ago!

Here’s a story she recounts about her sister Dort and struggles with French:

“Monsieur; voulez-vous couper mes chevaux avant ou après le champignon?” The hairdresser looked at her quizzically while the ladies under the hairdryers broke into laughter. What Dort had been trying to so earnestly ask was: “Sir would you like to cut my hair before or after the shampoo?” But it came out as: “Sir, would you like to cut my horses before or after the mushroom?”

She also reflects on the reason why she felt so at home in this country:

“I looked out the window. I had come to the conclusion that I must really be French, only no one had ever informed me of this fact. I loved the people, the food, the lay of the land, the civilized atmosphere, and the generous pace of life.”

On the French attitude towards “modernizing,” which I laughed out loud reading:

“The individualistic, artisanal quality of the French baffled the men Paul called the “Marshall Plan hustlers” from the USA. When American experts began making “helpful” suggestions about how the French could “increase productivity and profits,” the average Frenchman would shrug, as if to say: “These notions of yours are all very fascinating, no doubt, but we have a nice little business here just as it is. Everybody makes a decent living. Nobody has ulcers. I have time to work on my monograph about Balzac, and my foreman enjoys his espaliered pear trees. I think, as a matter of fact, we do not wish to make these changes you suggest.”

Indeed — it is this contrarian view against the rush of globalization and frenetic intemperance combined with a balanced attitude of “enough” that attracts so many of us to France.

Of course, this is a book by Julia Child and you will find yourself, if you have even the slightest inclination towards cooking, jotting down recipes or tips she casually sprinkles throughout the book.

It’s a great read, with quite a few photos, many of which were taken by her loving and devoted husband Paul Child.

A version of this article originally appeared on my Goodreads page.