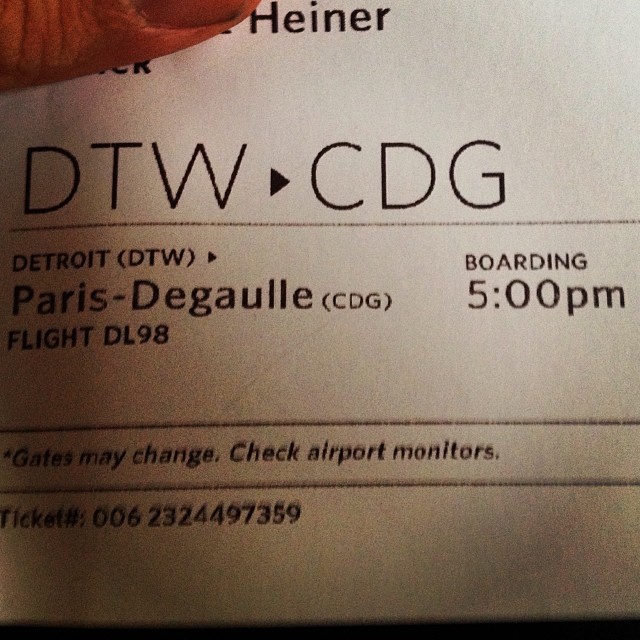 A few days ago I began my fourth year in Paris.  I wanted to use the milestone to share some reflections on how I have changed and ongoing tips on how to make the move yourself.  This is the final article in a series of four.  Here are the first, second, and third.

“It will be nice to be home for a month, right?”  My friend smiled, expecting an affirmative rejoinder.  I smiled too, as I knew what he meant, but I gently replied, “The US is home for my family, but Paris is my home now.”  He nodded, though his countenance said, “I want to talk to you more about that sometime,” and I’m sure my smile betokened a willingness to do so.  But I haven’t fully articulated those thoughts, even mentally, until recently.

My recent month Stateside was full of activity — one sister got married at the start of it and another one had a baby at the end of it and all the while I carried on running my businesses while catching up with old friends.

Home.  In the seven years I lived in Kansas City it wasn’t long before I felt that warm sensation upon returning there from a trip.  Home was near family.  Home was where my friends lived.  Where my business was growing.  Where my staff worked.  Home where was where my bed was — where I had a fireplace and where I could quietly cook breakfast.  But as I look at these characteristics, even now, I realize I am describing comfort.  And yes, a component of home is comfort.  But that’s only part of it.  That’s the present.

Home.  There’s also the past.  You need to feel a rootedness and a belonging.  But that was a tenuous position for me in KC.  Yes, I finished an undergraduate degree there and built a productive company.  But it was self-made.  Perhaps that desire to connect with the past was why I loved St. Louis so much.  Not only did I have relatives buried in that city, but in the one year I lived there I felt the comfort of knowing that when a branch of my family had emigrated from Europe (from England, Ireland, and Alsace), that they settled in Southern Illinois and the St. Louis area.  Yes, Kansas City was in Missouri, but the St. Louis side of the state was actually tied up with my family history too.  Rootedness and community — people who know your name, your habits, your history, and your family.  That’s home too.  That’s the past.

Home.  Home is the future too.  I have some truly lifelong friends in KC that I cherish time with whenever I visit.  As I built my life in that area all sorts of ideas were mooted as I considered a lifelong stay.  The University of Missouri at Kansas City had a fully funded Ph.D. in Entrepreneurship that would have offered a leisurely career in academia, but it didn’t excite me, and given my experience teaching a couple of semesters as an adjunct in an MBA program, it was clear that the hierarchical setup in a university setting wasn’t for me.  I considered politics (a sure indication of the naive 20-something) because I held (and still hold) practical nonpartisan civic planning principles that I think have wide appeal.  I thought about buying into businesses, and went so far as preliminary discussions with some principals of those companies.  But none of it inspired me in the visceral manner that Paris did.

Home.  Knowing you are where you belong now, with roots in the past, and a future to look forward to.  That all comes together for me in Europe, in Paris, deep in my bones.

Two weeks ago I visited the Museum of Immigration out on the edges of the 12th.  It’s a remarkably ugly building, but the exhibits and information are good, particularly in explaining the flow of different immigrants to France — some for reasons of war and violence, others for economic betterment.

As I took in the mountain of data I considered my own case.  I wasn’t fleeing war, as so many are in Europe these days because of incoherent US-led actions and policies that managed to destabilize the Middle East and North Africa.  I wasn’t seeking a better life economically.  Indeed my experience at the time of just selling a business should have encouraged me to stay.  I had moved to a US city with no connections, and with some of my own funds, a couple of investors, and a co-founder, built a company from nothing to one that successfully sold and transitioned to a new owner.  I could simply wash, rinse, and repeat if I chose, with little interference and regulation from the US government.

There was also my family’s disapproval.  They, who had already considered me an absentee uncle and brother would be even more aggrieved.  But that was in part my fault for not successfully explaining to them before how differently I weighed my own personal desires and ambition against family and community pressures.

When I immigrated to the United States in 1988, I was already a citizen, but the move wasn’t my choice.  In 2013 I came to France as a noncitizen, but entirely by choice.  And like many immigrants before me, I jumped through legal hoops while setting up the infrastructure for my own businesses to be based in my new country.  I didn’t come here to “get a job.”  I came here to build a life.

I’ve always been an optimist, but it’s only recently I’ve realized that immigration — of whatever kind or character — is a supreme act of hope, not just for the “better life” which is, seemingly the only reason ever mentioned in news stories about immigration, but because it is such a big ask to make and create a new home.  Getting a new job, a new house, learning the ins and outs of a city — these things are not so hard.  But building another home — tying those long, colorful, and winding threads of past, present, and future into a coherent tapestry, that’s hard.  That’s perhaps why those of us who weren’t born here love it so much, because we don’t take any part of this experience for granted.

As the year ends, I would challenge you to consider whether you are truly living at “home.”  And if not, why not?  2017 is waiting to challenge you.

The photo is from my own Instagram feed, from the day I officially moved out of America, December 10, 2013.

6 thoughts on “Three Years On, Part IV: Where Is Home for the Immigrant?”