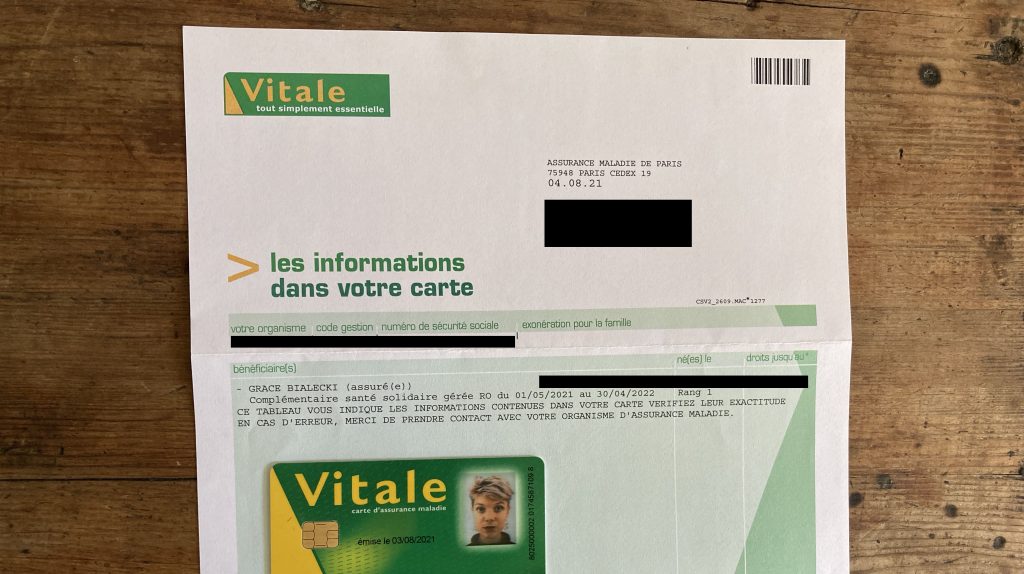 For the first year after I arrived in France, every time I went to the pharmacy or doctor, they’d ask for my carte vitale. This is the health insurance card every French person has which allows them to be reimbursed for medical expenses, and each time I politely explained I didn’t have one, the person checking me out would be shocked. To be paying out of pocket for my medical costs was unheard of, even though they were fractions of what I was used to in the U.S.

It took me longer than it could’ve to realize I also qualified for medical insurance or assurance maladie. After going through the process, the first document I received was a temporary social security number or numéro provisoire. If you’re in France on a carte de séjour visiteur, this is the only number you’ll be assigned. However, if you are here on a talent visa or vie privée visa, you’ll be eligible for a permanent social security number, as well as a carte vitale.

Anyone living in France in a “stable and regular manner” qualifies to be covered by France’s healthcare system. This means you do not have to be born in France, married in France, or even working in France to register. However, it means you do have to have spent at least three months in the country and have a valid titre de séjour.

How do I Register?

To register you need to send copies of the following documents to the closest health insurance office. You can look up which one here.

In my case, I sent copies of my passport and current titre de séjour, as well as the récépissé of my PACS — all documents which showed I was a ‘permanent’ resident in France. I also included a long-form copy of my birth certificate which had an apostille and had been translated into French, as well as a letter d’hébergement saying I lived with Fred. Luckily, I was doing this process soon after being PACSed and had all these documents on hand. Proving you live in France usually all boils down to the same set.

Why is it Taking so Long?

Bonus Question: What’s the difference between a temporary and permanent number?

Your temporary number allows you to be reimbursed for expenses, assuming to keep the form the doctor or pharmacy fills out, as well as any prescriptions, and mail them to assurance maladie. The reimbursement is done directly to your French bank account on file, though the entire process can take up to a month.

With a permanent number, you qualify for a carte vitale which acts as a debit card and means the French government is paying the upfront costs, or at least the percentage of costs covered by the health care system.  You can create an online account on Ameli (the French government’s healthcare site) which means you no longer have to mail completed forms and proof of doctor visits to be reimbursed. That said, as I’ll talk about in a future article, being reimbursed doesn’t mean that one hundred percent of the costs are covered.

If, like me, and you’ve assumed that you don’t qualify for healthcare because you’re not French, I hope this article is helpful. As you can see, the process of applying is relatively straightforward and worth it from a financial sense and for the mental relief of being “covered.”

Photo is of my new card when it finally arrived!