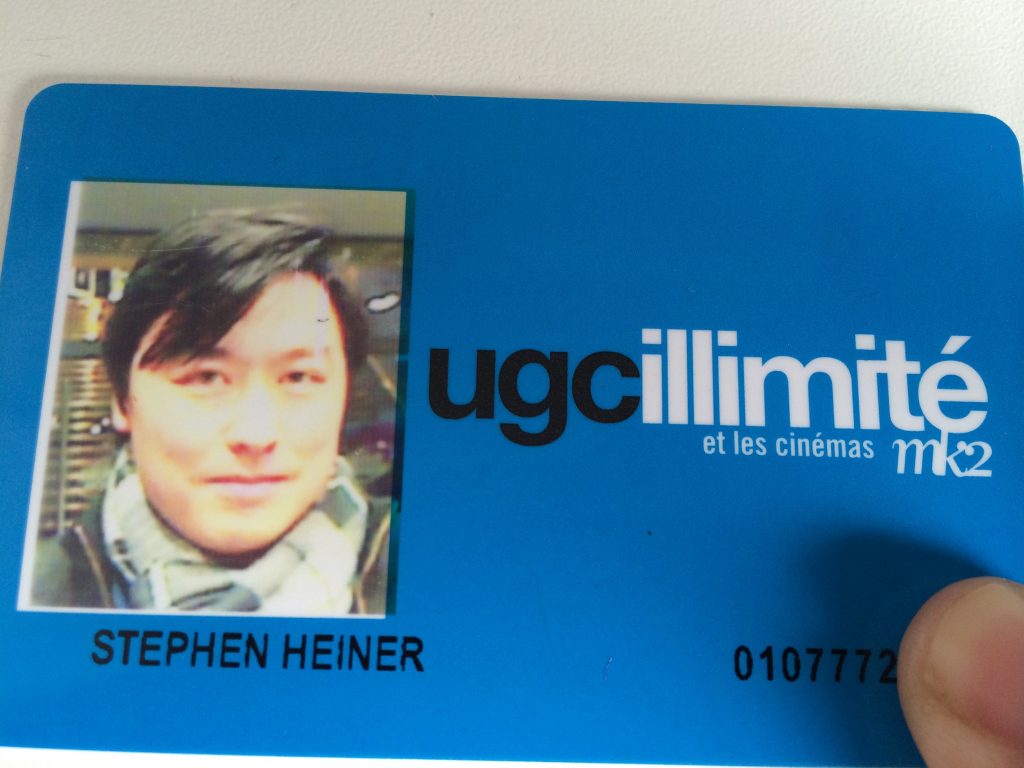 In an earlier post I made reference to the fact that something had finally forced me to get a French bank account, after two months of holding out.  And it’s related to my being a cinephile: the movies.

Many movies are effectively “imported” from the States and hence cost a lot more than they do back home.  Indeed, a Sunday matinee in at least one place in Kansas City will only set you back about $4.25 — a little under 3 euros.  For four times that sum — 11 euros — a seat can be had for the same movie in Paris.

How do you fix this, especially if you love movies?  Enter the UGC Pass Illimité, or “Netflix Live” as I like to call it.

You pay 20 euros a month and get access every single day to any movie you want.  For 10 euros more a month you can get tickets for two.

You need to show your pass along with your ticket.  The pass has a photo of you.  You also can’t enter until 10 minutes before the séance (viewing/showing).  Incidentally the “bon séance” the ticket taker says to me after tearing my ticket still sounds funny whereas “bon match” at a sporting event sounds totally normal.

You can make advance reservations ahead of time (via an app or online) and pick up your tickets 10-60 minutes ahead of the show (in the final 10 minutes if you haven’t picked up those tickets they get released and you have to try again at the box office hoping someone hasn’t scooped them up).

Well, that’s what I said as I headed to a UGC (theater brand pronounced you-jay-say) to buy a pass, armed with my passport and a credit card, full of the confidence that any American has when in possession of these two items.  The very attractive girl who waited on me — who some weeks later I found out spoke British-accented English — played dumb for the perceived tourist and shook her head as I asked, haltingly, in French, for a “Pass Illimité.”  She replied, slowly, that I needed a French bank account.

You see, the French are really into automatic debits, so much so that when you open a bank account you are given a sheet of paper which contains 6 “cards” that you can cut out and hand to relevant vendors.  It contains all your relevant info and poof, problem solved.

The problem was that I had been holding out on getting a French bank account and so I just paid regular admission that night to go see Le Hobbit.  I mulled over just how many movies I would watch while in France and thought through the numbers again.  A weekly movie meant each film was just 5 euros, but any more in a month and it would be effectively even less.  As the year promised new Spider Man, Captain America, and even Bible movies, it was a no-brainer for me to get the bank account and provide her with my RIB the next time I saw her.

The trend in France at current is to subtitle original format (VO: version originale) which is awesome for those of us on the path to fluency.  I bring a notebook with me to jot down new vocabulary words as they flash in front of me.  Where it gets comical is the instances in which a character speaks Elvish or another tongue non-native to me and the subtitles are still in French.  It’s a bit of Kabuki, unless the characters are Orcs, in which case you can pretty easily figure it out.

As with any “unmetered” commodity, you will be willing to see “borderline” movies that you might have taken a pass on in real life.  If it’s effectively already “paid for” you think “why not?”  Two horrible movies I’ve seen courtesy of my pass include The Ryan Initiative and the new Hercules movie.  Also, depending on any number of weird factors, you sometimes have to wait a week or two to see a movie already out in the States, but sometimes it releases here first.  I guess it’s upside if it’s the latter, right?

Pass Illimité, like Vélib, is a program that makes living here not just affordable, but at least in one aspect — cheaper and more innovative than back home.  And that’s rare enough to deserve a mention. 🙂

5 thoughts on “The UGC Pass Illimité or “Netflix Live””