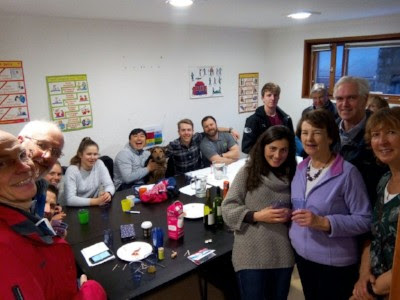 There have been plenty of adventures since I moved back to Paris after living in Morzine for the month of February, but before I tell you about those, I should put a bookend on my time there and tell you why I think you could benefit greatly from doing a similar full-time immersion program — be in the mountains or at the seashore.

I was expecting to learn a lot of French and to personally immerse myself outside of classroom hours with French apps, podcasts, and videos.

I was also expecting to improve, in some way, in my skiing.

In the back of my mind I also thought it would be a nice “reset” or getaway at the beginning of 2018 to orient the rest of my year.  The French Alps for a month?  “Why not,” as the French say. 🙂

My confidence and progress in French grew leaps and bounds.  While I entered into the program on the edge of A2/B1, by the end of the month, with 80 classroom hours under my belt, I was much closer to really starting into B2 work.  For those of you unfamiliar with the DELF system, progress starts at A1, then A2, then B1, and so on and C2 is the final level.  For context, C2 means you could be hired by pretty much any French company, though many of my friends have been hired at as low as B1 competence (since many younger French enjoy speaking English at work, and at many tech companies, English is ironically the linguafranca in this country).

It turns out when you spend four hours in a classroom per day (two hours in the morning, and two hours in the late afternoon, with weekends off), your progress is cumulative and exponential.  My halting descriptions in my first week were night and day from my confident (albeit short) explanations of the fourth week, when all fear about speaking French for extended periods of time with complete strangers had vaporized.

My skiing also improved.  I was a level 5 skier coming into my time in Morzine and confidently left a level 6.  I left to ski right after the morning class each day and would come back a bit before the afternoon class and change and have a quick snack, and get the homework from the previous day done…most of the time.

As for the podcasts and videos?  Well that lasted about a week, if that.  I was getting plenty of material in class as well as homework and there is such a thing as burnout.  You have to make sure that you’re giving yourself enough time to absorb and retain material, as well as reflect on it.

The reset?  That definitely happened.  You can’t be surrounded by views like this, this, that, and that, without relaxing and reflecting on your life and how fortunate you are to be in such a situation.

What I Didn’t Expect (And Loved)

I didn’t expect to have to really explain myself and be open in class.  One of the key things to master in the B levels is the correct time to use the imparfait vs passé composé tenses.  I won’t get into all of the differences right now, but one very basic difference is that the imparfait describes past habitual actions, whereas the passé composé describes an action that occurred at a specific time (think, “I used to walk to school when I was younger” vs “one day in school a tornado appeared in the school yard”).

But using these tenses in supervised conversation with my classmates (we would pair off and our teacher would stroll around, eavesdropping and spot-correcting either our pronunciation or formation of the tense, but in a kind manner, not an annoying one. 🙂 ) meant I had to describe things like, “my earliest memory” or “my favorite vacation” or “my closest friends.”  It was a double vulnerability — firstly, sharing intimate details of my life with near-strangers (who would eventually become friends), but secondly, being okay with mispronouncing and misforming my French.  This was the “safe, supervised” environment that I knew would help develop my French quickly.

I really didn’t expect the social aspect of the course.  I lived in a giant apartment with about seven others.  There was an Irish couple whose oldest child was my age in their own room, an 18-year-old English girl on her gap year in her own room, a 21-year-old English guy on his study abroad year (he’s studying German in Stuttgart) in his own room, and three other guys in my room, which had bunk beds: an Australian and two Swiss (from the German part of Switzerland).  We would occasionally gain and lose people as the weeks wore on, as some people were only there for a week.  One night after dinner, I marveled at the fact that we had spent all day working on French, had dinner together in English, and then some of us chatted in our own native tongues — the Irish couple chatted in Gaelic (which they’ve spent a fair amount of time studying), the Swiss happily chatted in Swiss-German, which is a happier, bouncier version of the Schmetterling-variety High German that you think of when you hear the word Deutschland, and the Brits and the Aussie and myself would deconstruct idioms that we all used that were usually never used in each others’ cultures (e.g. the British use the word trousers whereas Americans use pants.  The Brits laugh at that as pants mean underwear to them.  The Aussies just shorten everything, so that’s always fun to talk about).

As the “uncle” of the group — I was a couple of decades older than most of my roommates — I organized “family dinners” on Saturday nights in which we would sample the Haute Savoie cuisine of our region: raclettes, fondue, tartiflette, etc.  It was a great time to unwind and just get to know each other even better.  It also gave us some buffer — I, for example, had told all my friends that I had no intention of speaking with them in February so that I could give all my energy and attention to this.  But, I hadn’t calculated that I would still need human interaction (surprise!), and my fellow classmates were a great help in this way.

I started with a new French tutor here in Paris the week after I got back.  I wasn’t about to lose all the progress I had made.  It was wonderful to sit down with him and work through tenses and grammatical constructions still fresh in my mind.  The reaction from some in Morzine (and, I imagine from some of my newer readers who have not been on this journey with me from the beginning) was: “Five years in Paris?  But surely your French is fine!”  I’ve written about this here and here but I often explained that it’s not a problem to learn a basic “subsistence” level of French to get through daily life, the prefecture, and short conversations with friends.  It’s the longer conversations with friends and the lectures at museums that were more of a challenge, and that was what I was here to improve.  But to be fair, you can’t live here for five years and not pick up on the proper pronunciation, and I was complimented on my pronunciation by several of my teachers.  I smile to think about how scared and hesitant I was in my very first year in France.  It’s that fear that keeps so many people from progressing.

I overcame a lot of that fear, and I got so much more out of the experience than I expected.  I want to pay special compliments to my teachers Emilie, Justine, Celine, as well as Christelle, and all the AFS team that worked hard on every aspect of our time in Morzine.  It was amazing and unforgettable.

Photo is courtesy of Alpine French School and was taken the night of our “going-away” party.  I’m in the middle with our school dog Mani.  Several of us who had been there for some weeks were leaving the next day and they feted us before our departure.  To learn more about the school and how I learned about it (and about a discount for TAIP readers), click here.