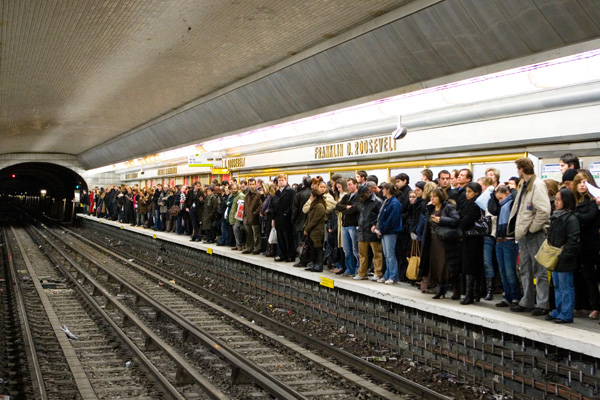 So I should confess that I’ve mostly avoided any experience of the strikes here in Paris.  I flew out of Paris on December 4th for a long-planned holiday Down Under.  The next day, the strikes began.  I just arrived back a few days ago and the strikers, worn down by almost a month with no pay, have mostly given up.  Just yesterday all the metro lines were running (albeit for a limited service).

There are knock-on effects of a metro strike, of course.  With everyone pushed out of reliable public transportation, the e-scooters (called trottinettes) are in high demand.  I spent 15 minutes yesterday walking to try to get a scooter and I was checking three different scooter apps as I did so.  So too today when I was taking the tram (3b) it was absolutely packed like I’ve never seen it before.

Friends have been messaging, asking about the strikes, and I try to remind them that just like the Gilet Jaunes, the international news media are in full hype mode.  The Gilet Jaunes have been in nonstop decline since their very first protest in November 2018.  French people (somewhat) understandably sided with them on the fuel tax, the government u-turned, and the public promptly lost interest.  Parisians have dealt with these outsiders showing up to our city (often committing acts of violence) week after week for over a year, but in ever dwindling numbers.  It’s all well and good to boast that it’s the XXth consecutive week of striking…but most of us go about our Saturdays not even remembering that anyone is striking about anything.

And as for this current transportation strike, it was again at its worst at the beginning, but it has been in nonstop decline ever since.  Public support continues to decline and the number of drivers returning to work continues to increase.  The problem is one of leverage.  The strikers thought that Macron would U-turn, but he didn’t, which meant everyone’s Christmas and New Year’s were affected.  There are no holidays in January, just people trying to work, and I haven’t met a single French person who would march in solidarity with the RATP workers for a “right to retire at 52.”  Sorry kids, life expectancy has gone up, which means you have to work longer, just like the rest of us do.  If Macron didn’t give in for Christmas, why would he give in now?

The strike has also hit hardest in Paris, as public transport in the other big cities of France is fully operational, and SNCF trains are now running at 85% of regular capacity or higher.  Can it go on much longer?  The question is how much have the transportation workers saved up.  There was a much bragged-about crowdfunder the other day that raised 1,000,000 euros for the workers, but if you divide that 1000 ways, you only have 1000 euros each, and there may be even more than 1000 workers staying out on an extended strike.  1000 euros isn’t going to make up for a month of missed pay that will not be paid in arrears whenever this ends.

What has impressed me is the willingness of the Parisians to just get on with things.  They are carpooling, buying or renting e-scooters, using the Velib system, using the (more available than metros) buses, or simply walking more.  There’s also, in the background, the reality that lines 1 and 14 (which are run by computers, not humans) have been running for 100% of the entire strike, and with station upgrades for lines 4 and 11 which happened all of last year, we can’t be too far off from a future when automated lines remove the last bit of pressure these unions can apply.  The 2024 Olympics which we will host are creating an environment to accelerate the building of lines for express trains from Orly and CDG to come direct into the city.  We might see the same thing happen with the metro lines as well.

One thing remains clear to me, the media always manage to hype things up enough that my friends outside of France are more worried about the situation than those of us actually living here.  It’s just a strike.  The problem with the French doing it so often is that, like any “threat,” the overuse leads to indifference.  You can’t scare anyone in France with a strike, not least of whom, it seems, President Macron.

We will see what happens…

The photo is from a 2007 strike, on the line 9 stop for the Franklin Roosevelt station.