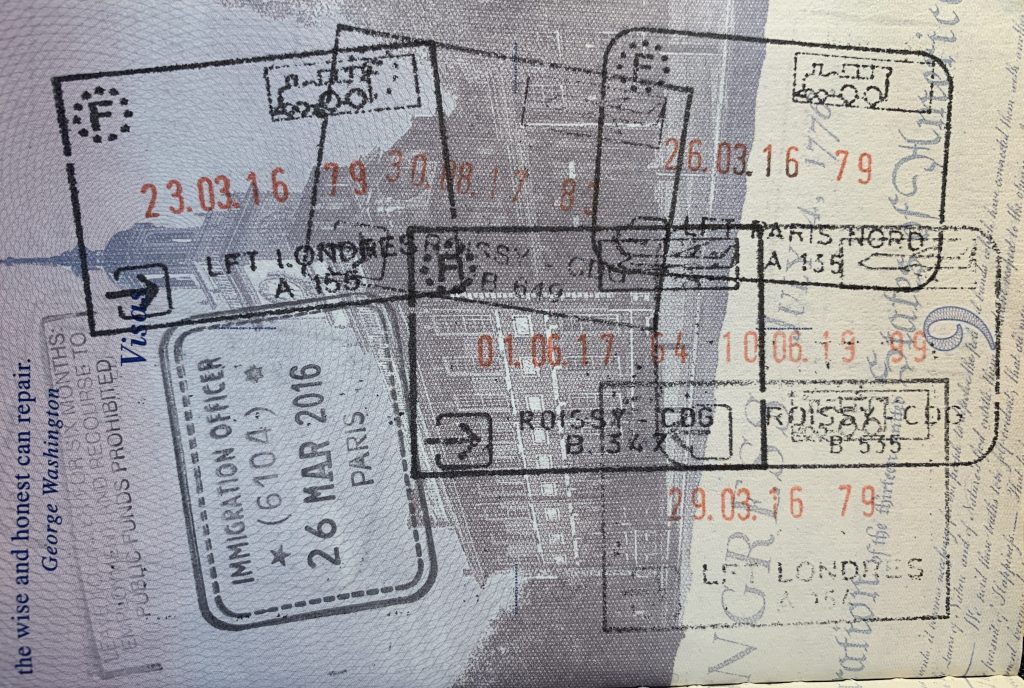 So in an earlier post I shared that I had been pickpocketed late last year and hence no longer had my physical four-year carte de séjour, which was perhaps the hardest-earned French document in my possession.  In that same article I noted that it really wasn’t such an important document in terms of daily life in France, and after this most recent theft, I had a number of trips in which an EU residence card had no relevance: visits to Australia, New Zealand, Singapore, the UK, Italy, then Bulgaria.  However, then a little thing called lockdown happened and when we were finally deconfined, the EU residence card took on a new meaning.  I knew in the back of my mind that I should have some kind of replacement document, but knowing that I was putting in for my ten-year card quite soon led me to rely on my confidence in how the system worked and my inherent knowledge of and patience with French immigration.

The end of July saw me at the Aer Lingus counter in Chicago, following a whirlwind three-week trip to the US which I took because of a convergence of very low airfares and the possibility of doing some work with a client as well as on one of my business projects.  I’d also get some family time.  I was tired, but the accomplished-a-lot-and-feeling-good kind of tired.  The agent at the counter asked for my passport and then she asked if I had residence in France.  I said that I did and handed her a photocopy of my residence card.  She didn’t really know her way around it so I pointed to the expiration date, which is in September of next year.  She nodded, but slowly.  A colleague hovered nearby.  “No way a photocopy is good enough,” he said in a voice probably intended to be low enough that I couldn’t hear, but I did.  “Legit, I think he needs to have the actual card.”  She seemed swayed by this and asked me to wait while she “checked on something” (read: go ask my boss).  She came out after a few minutes during which time I continued to smile and look composed.  She didn’t seem to look too dire when she came back, but wanted a bit more context.

“I understand where you’re coming from,” I said, “but here’s the police report noting it was stolen, and obviously since lockdown I haven’t gotten an appointment for a replacement.”  I smiled and simply gave the attitude that this was not a problem at all.  I live in France, I lost my card, leave this to the French.  For their part, an airline that incorrectly transports someone without entry rights has to bear the cost of repatriation, so she was not being unreasonable in pushing back a bit on me, but the fact that she didn’t really put up a fight was an indication of something I would continue to see: a willingness of those to be “understanding” to travelers in this time period.

Landing in Dublin turned out to be no big deal, as this was an inbound EU flight so I was just able to do a simple transfer within the airport.  I wasn’t forced out through customs as I had been on the way into the US.  Next stop: the French border.  I handed over my dark blue passport.  The border policeman’s eyebrow immediately flicked up as he saw the emblem of the eagle which grasped olive branches and arrows in its claws.  He assumed English and asked: “Why are you visiting France?”  “J’habite ici,” I smiled and answered in French.  “Ah,” he said, and asked for my residence card.  “Malheuresement…” I explained that I had been pickpocketed and handed him copies of the police report and a copy of the residence card.  He frowned.  He continued in French, asking why I had not gone to get a new card (he noted that the police report was dated November of last year).  I told him I had been traveling, and then afterwards there had been lockdown.  He pointed out that there had been deconfinement and I countered, smiling and polite, that it was hard to get an appointment (I knew from friends; I hadn’t actually tried myself).  He looked at some colleagues who had been obviously listening in.  They shrugged.  He flipped to an already crowded page and stamped.  “Merci; bonne journée,” I smiled.  No documents?  No problem.

Not asked for?  The contact tracing form that Aer Lingus insisted we fill out before arrival.

I had planned to do some work in Salzburg with a client in August when an opportunity came up for us to do the work in Croatia instead.  Salzburg is still on my list to visit, but summer on the Adriatic is hard to beat.  Croatia was one of the countries that was “open” to Americans with a valid negative Covid test within 48 hours of arrival and proof of accommodation.  But, would they treat me as an American citizen or as an EU resident?  Surely, I couldn’t use the photocopy again?  Should I get a Covid test just in case they decide to treat me like an American?  Life continued on in Paris and a few days before the flight I decided to wander down to the Paris Plages to get one of the free tests they were giving out (the blood test used a pinprick and a few drops, with results in 15 minutes, the PCR test had a minimum 5 day waiting period for results — I opted for the quick result blood test).  The philosophy I have with French administration (always be prepared for everything they might ask for) guided me and while the negative test result printout I was handed didn’t look as “official” as I would like, I felt it would satisfy the Croats.

It was a fairly full flight to Zagreb (unlike domestic US flights, there seems to be zero insistence on the vacant middle seat) and I was one of the first off the plane and hence one of the first in line for passport checks.  When I handed over the American passport he asked where I had come from.  “Paris,” I answered.  “Transiting?”  “No, I live there.”  “Ah, where is your residence card?”  I handed him the photocopy of my residence card.  His face betrayed skepticism.  “It was stolen, here’s the police report.”  I handed it over to him.  I didn’t know if he could read French but his eye caught the filing date: “This was in November.”  “Yes, and we had lockdown so I didn’t get a replacement.”  He looked at everything again to satisfy himself, it seemed, then started flipping my passport pages to find a place to stamp me through.  He handed me a piece of paper with contact information for all the places I could get tested if I wanted.  No demand to self-isolate.

Not asked for?  Proof of accommodation, negative covid test, or contact tracing form.

Before March 2020, when I came home to France through passport control, the agents would scan my passport and lazily stamp it, usually while talking to their colleague.  They didn’t ask if I was a resident, because they didn’t care.  When I presented that passport, they assumed I was a tourist and just stamped me through.  I could have always bypassed this process by handing them a resident card along with my passport.  This would mean my passport would not be stamped.  But I never bothered with this.

When I handed my passport to the border agent his eyes flicked up at me as he perceived the dark blue US book.  He scanned it and after looking at his screen for a moment, handed it back to me.  I gave the usual, “Merci; bonne journée,” and walked through.

The only way he would have handed my passport back to me without stamping it?  If the record he was looking at on my screen indicated that I had a legal carte de séjour, and hence was a resident of France.  No need to stamp the passport of someone returning home.  Had it always been this way and the border agents just assumed if I didn’t hand them my card I was just a tourist, and they didn’t look any further at my record?  Or is this a new level of digitization that’s been achieved by the French, something we’ve seen a lot of during Macron’s tenure?

Either way, I was home, and it was my fastest way through yet.

Not asked for?  Carte de séjour.

I’m not saying that you should, as I have, push your luck.  Next week I’m going to stop putting it off and get a récépissé which will serve as a temporary ID until I get the appointment for my ten-year card.  What I am saying is if you don’t feel like you’ve gotten everything just so during this period of travel, don’t let that deter you.  A ready smile, a good attitude, a fair number of documents, and a plausible explanation might just see you through.

The photo is one of my passport pages.  As you can see, the French don’t really care whether there’s “room” for a new stamp. 🙂

6 thoughts on “Traveling Without My French Resident Card”