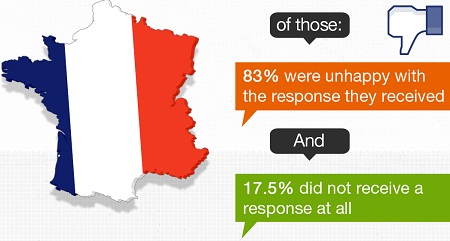 “It’s not my problem”

-accompanied by a shrug, said by almost every French person ever to a customer in need of help.

The quote above is a caricature, surely, but my French friends will admit it’s pretty close to the truth.  It’s my third year here in Paris, and when your expectations are so very low, when you get surprised, you want to share it.  So, here are two such stories.

Groupama provides my renter’s insurance, something that is helpful in itself, but is also a requirement of most of my visa visits, including my recent one to move away from visitor status to a path to citizenship.

However, they, like many French insurers, make it impossible to cancel a policy online.  You have to go in person and provide a signed etat de lieu as proof you have moved out.  Your word is not enough (same thing happens at the bank when you try to change your address).  Do you have proof?

In any event I had moved out of this place roughly 6 months before I managed to get to my insurer.  I took the blame, as other things always seemed to take priority.  Not only was the cancellation smooth, only taking a few minutes, but the agent marked the cancellation to the end of the lease, and credited my account with 6 months of premiums!

As the French write: “Waoh!”

The next mission was already impossible in my mind before I attempted it, but in the spirit of “try everything once” I took back two inflatable mattresses to Decathlon.  I had purchased the first one for guests who might stay at my apartment and it worked fine for months.  Until it started to slowly deflate.  I spent some time trying to find the slow leak so I could patch it, but no dice.  It was only 15€ and I hadn’t kept the receipt.  I bought another.  This one started deflating almost immediately.

I suggested to a couple French friends that I would try to return the beds without a receipt (I had idiotically not kept the second one, either).  They laughed derisively.

“I’ll just play the dumb American,” I said.  “Plus, I’m willing to accept store credit.”  Turns out I didn’t have to.

I arrived at the enormous subterranean Decathlon near the Madeleine (Americans, think Dick’s Sporting Goods or Sports Chalet) and got into the returns line.  When it got to be my turn I explained that I didn’t want an exchange, but that I wanted to return these mattresses for store credit.  The young girl called a colleague over, who then walked with me to the camping department, where the inflatable mattresses lived, in order to observe the malfunction.  And to my dismay, the same thing happened as whenever I brought an Apple device to an Apple store for troubleshooting: nothing.  I almost wonder if the Apple Store is a stern father figure for my Apple devices and they suddenly “behave” when they are at home.

I watched, bemused, as the inflated mattress which had deflated over and over in my home held the air intact.  We even tried sitting on it to force the leak.  Not a peep.  Resolute as Churchill on the beaches.

The kid read my incredulous expression.  “Don’t worry,” he said in French.  He walked me to the counter, got me a gift card for the value of both mattresses, and as I walked out of the store and held the gift card in my hand, contemplating the imposing facade of the Madeleine, I smiled.

Maybe there is a French word for “customer service” after all.

PS  Don’t worry, I have a horror story to share in the future for those who wish to further the paradigm of “the French just don’t care about customer service.” 🙂