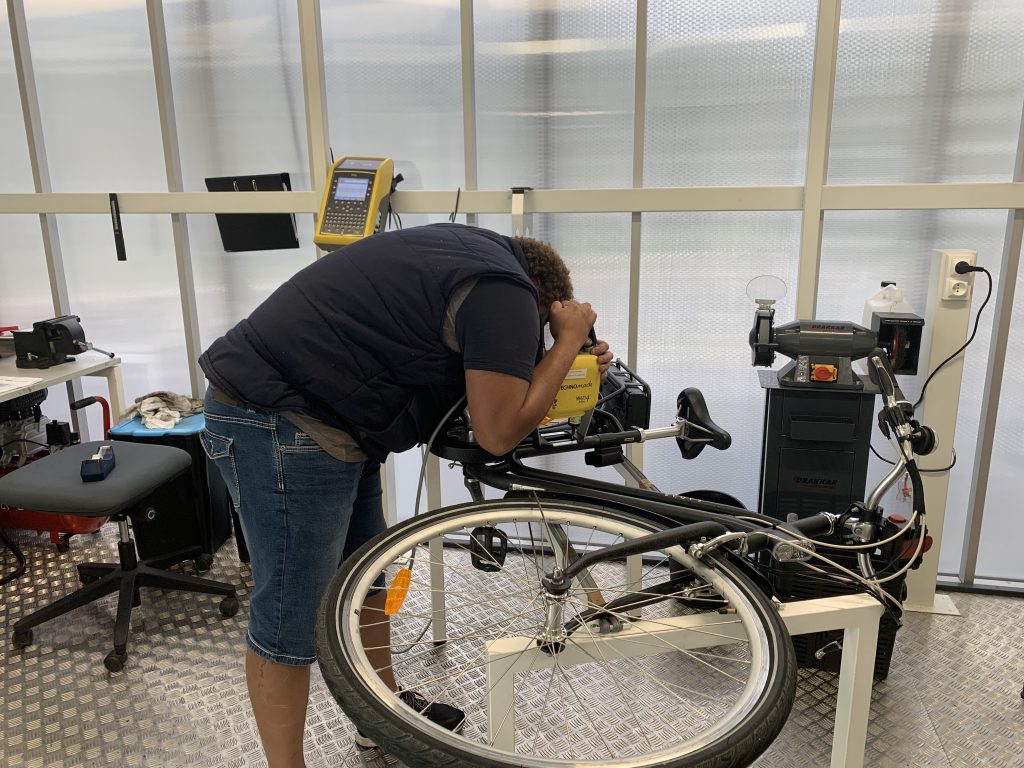 Once you’ve spent a lot on a brand new electric bike (even if you got much of it subsidized) you want to protect it from theft.  Unfortunately, not only is Paris a place where more than one of us have at least one “I got pickpocketed” story, but it’s also a place where bikes get stolen: in France 400,000 are stolen annually.  So apart from using one or two strong locks on your bike, what else can you do to protect yourself?  Enter Bicycode.

When the authorities do manage to find stolen bicycles, it’s challenging to return the bikes to their rightful owners because of changes/damage to the bike.  The French Federation of Bicycle Users (FUB) set up Bicycode back in 2004 with the idea that a “tattoo” on the bike frame would offer a point of identification that could connect a stolen bike to its rightful owner.  It has since marked almost 250,000 bikes in France and Switzerland.

Now, this isn’t to say that your would-be thief is going to see a Bicycode sticker on your bike frame and be scared off from stealing your bike.  It’s just an additional measure you can take to make sure that if your bike is stolen, you’re at least giving yourself some chance of getting it back.  Of the 400,000 annually stolen bikes in France, 150,000 are recovered, and Bicycode at least gives you some kind of shot at recovering your wheels.

Once I was sold on this short and easy measure I went to the interactive map showing who the retail providers are and made an appointment.  A number of shops in Paris are not doing them on a regular basis so I ended up going to Melun, which has a shop doing them all the time.

I had to do some basic paperwork (this is France, after all) to establish that I was the owner of this bike and was registering it at an address I had proof of living at. If you ever sell your bike in the future, you can give the buyer your registration material and Bicycode provides a way for the new owner to then register the bike in his/her own name.

Once all the paperwork was done (probably ten minutes of work in total), I handed over 10 € and he got to work.

The technology used is apparently resistant to weather, water, UV damage, and high-pressure washing.  The tech took 15 seconds to engrave it once he had the bike in the right position.  The code he put on the bike is unique and linked to my bike’s serial number, my name, and my email address.  If your bike is stolen you log onto your Bicycode account and declare the bike as stolen and give the address of the police station where you made the report (which assumes, of course, you’ve done that as well).

Add to Your Insurance As Well

I also contacted my renter’s insurance to ask them if a bicycle theft was covered and they said it was.  They just needed some paperwork (of course).  I sent them proof of purchase and the serial number of the bicycle and signed a rider to the policy adding the bike.  No change in my premium and the bike was now included.

You can’t prevent your bike from being stolen in all circumstances.  Basics include:

But once you’ve added a Bicycode and added the bike to your insurance, there’s nothing more you can do to protect yourself.  Enjoy your ride!

Photo is of the technician marking my bike with its unique Bicycode.