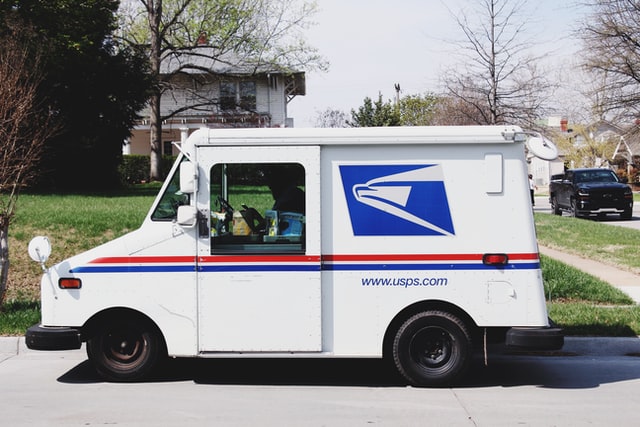 Covid-19 has shaped many parts of our lives in the last 12 months.  One way that wasn’t entirely expected (at least not by me) was the performance of the United States Postal Service.

While the USPS has never been a world-beater, throughout my years abroad I’ve come to expect a fairly reasonable level of service.  If a package was sent to me from the US I could sometimes get it as early as a week, but more often than not it took two weeks.  Not anymore.

I still maintain a US address for various administrative reasons and every now and then I have some of that mail forwarded.  Sometimes it’s routine stuff like a new credit card to replace one that has hit its expiry date.  Other times there are some important bits of paperwork I need to deal with.  In 2020, I also got “free” money from the US government in the mail.

In late October 2020 I had a package put together with some of these important items as well as a couple Christmas gifts I wanted to give to friends in Paris.  Not only did the package never arrive, but it was returned to sender in late January of this year.

The USPS does provide tracking, but there was no update for that number beyond its first original scans.  According to the website, it didn’t appear to have ever left the state of origin.

I wondered if it had been delivered and my local post office had simply forgotten to give me a delivery notice, as the box would not have fit in my mailbox.  I showed the tracking number to a clerk at La Poste.  A few taps later he told me in French, “It’s in customs in Chicago.”  Of course the French knew where my package was, but the USPS seemingly didn’t.

It was late December by that time, so I was able to file a claim for the package, but I had given it up as lost.  I pictured it somewhere in the warehouse you see at the end of Raiders of the Lost Ark.  But just when I had given up hope, I found out it had been returned to sender.  On cue, the USPS called me to follow up on my claim three days later.

The woman on the phone sounded so kindly I had no heart to turn on my customer-service indignation of the US variety.  Indeed, I was so relieved to not have lost the contents of that package (which included a ring I had resized) that I just thanked her for following up and verified that I would get a refund given that I never actually got the package.  “Yes, no problem,” she said.

When a friend went to get the refund the clerk blamed the French.  “It was delivered,” he insisted.  True enough, the package did look like it got stamped/stickered through customs.  But somehow or another it never got to my post office.  It came to France, hung out, then was returned.

I didn’t want to take any chances on the next package so I stripped out everything that wasn’t critical (I’ll get those things some other time, I figured) and focused on only sending something business envelope-sized.  That envelope was sent on February 9th and I’m happy to say it arrived just before the end of February.  “It’s a Christmas miracle,” I typed to my friend as I sent a photo of the envelope in my hands.

Three months for a non-delivery.  Almost three weeks for something the size of an envelope.  Thanks to the tracking I was also able to see that of the 17 days it spent in transit, 12 of them were in the United States, and 11 of those days were spent getting from the origin, in the middle of the country, to New York.

“What is going on?” I asked a friend of mine who I suspected might occasionally mail herself things from the US.  She didn’t have a ready answer, but did tell me that her mother had attempted to send her Halloween candy both in 2020 and 2019.  Both times the package never arrived: once it was returned to sender and the other time it disappeared.

The USPS has been underfunded for a long time and unlike what I’ve experienced in Europe and Asia, routinely undercharges for both domestic and international packages (while managing to charge a FORTUNE to ship to Canada, which is closer to 48 of our states than Hawaii or Alaska).  It seems to have caught its own strain of Covid-19 and is, for the moment, not to be relied on for timely package deliveries.

For comparison: a book I ordered from the UK on Tuesday arrived on Thursday of the same week, which is even faster than I’m used to receiving packages from across the Channel.  Clearly not everyone has the same Covid problems.

Over the years I’ve often sent small packages to friends who were flying into Paris.  This allowed, in some years, for nearly half a dozen “courier” deliveries that I paid off with bottles of champagne.  That means is currently not as available.

So, if you’re in France and awaiting packages from the US, adjust your expectations, file claims, and be prepared to wait.  It is, after all, a First World problem.

Photo by Pope Moysuh on Unsplash

12 thoughts on “USPS to France? Be Prepared to Wait”