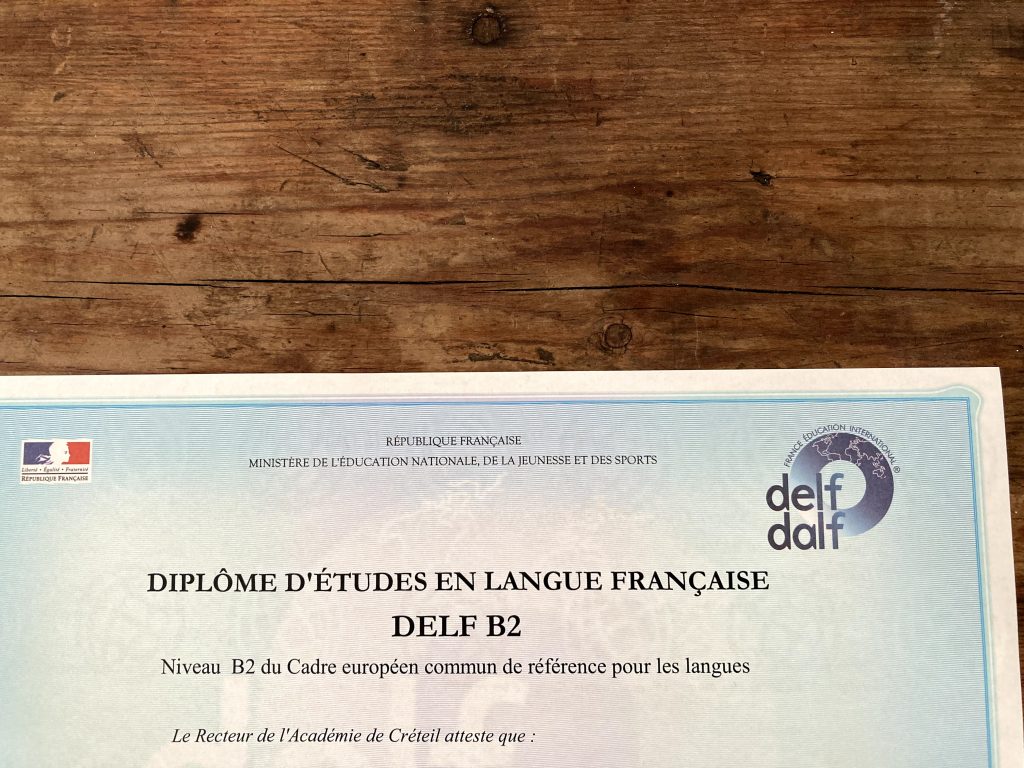 As Stephen mentioned in his article about the DELF A2, the DELF is an internationally recognized competency exam, and one that I hadn’t heard of until 2020. When I was at the appointment for my first visa vié privée et familiale, the prefecture employee mentioned that if I had a French diploma or a DELF certificate, it would allow me to apply for a multi-year visa. Since taking a French exam was less time consuming than going to university, I decided to sign up for the DELF. I’d already been studying French since age thirteen, so it felt like another strange, slightly-fun step on my immigration path.

Like all many thing French, signing up for the DELF was not as easy as I assumed it would be. Depending on the test you’re taking (there are levels A1 to C2), the exam is only given several time per year. While there is a list of official test centers, each center has different registration dates, requirements, and turn around times on their results.

After doing a bit of research in January then dropping the project without setting myself any calendar reminders (mistake), I found myself scrambling in early April to sign up for a May test. The only other B2 offered was in October, which would be after my visa renewal. The centers had limited capacity due to Covid, and all the ones I found in Paris were already full. This left me mailing my application to a center in Ivry (a southern banlieue). As an American who is used to everything happening via the internet, it constantly amazes me how many official letters and registrations I’ve had to send via mail since moving to France. It is truly a step backwards in terms of convenience and efficiency.

You Will be Convoked

I have also never received so many “convocations” or summons since moving abroad. These official notices are used by the prefecture, as well as in other formal capacities to tell you what time you have to be somewhere without you having any say in it. Although I had called the exam center and confirmed the two testing dates, I ended up receiving a convocation for the written part on Thursday and the oral part on Friday. In other words – not the dates they’d told me. Since the exam was full, and the slots were pre-assigned there was no way to change my time to one that worked with my schedule. On top of this, the exam took place in Juvisy-sur-Orge not at the company’s mailing address which was much closer to Paris.

Lesson Learned: Make sure your schedule is clear all testing days (the exam sites often list three separate days), and be prepared to be summoned at any given time. Also, determine where the test center is before signing up. As someone who bikes everywhere, I ultimately decided that 26 km ride through Paris’ industrial zones Juvisy-sur-Orge was not the way I wanted to arrive so I took the RER even though two-round trip tickets ended up adding another 15€ to my test costs.

Since the DELF is a standardized test, it’s easy to find practice tests and other resources online. My spoken French is fluent, and I had to write essays in French in college so I wasn’t concerned about my proficiency. Regardless, I decided to take two practice tests simply to know what I was getting into and to be prepared for the process on test-day.

One practice test later, I decided that was enough. The oral comprehension was fairly straight forward, the reading comprehension was even easier, and although my partner found plenty of errors in my written response, he deemed it at least a 20/25. Since all I needed was 50/100 to pass the test, I decided not to worry about getting a perfect score.

I arrived early and the exam started late which made the wait feel long. The proctor checked our convocations along with our IDs before we went into an upstairs classroom. It had been over ten years since I’d taken any form of test, so sitting at a desk and waiting for instructions was quite surreal.

They had changed the format of the exam since I’d taken the practice version, and the listening section of exam had more questions per recording, moved faster than I remembered, and was more challenging than the one I’d taken at home. I would recommend practicing this section at least twice (and in the most current format) to familiarize yourself with the number of questions as well as the recording speed.

Once we got past that, the reading comprehension and writing were straight forward. I finished with forty minutes to spare and wasn’t allowed to leave. This was both strange and frustrating, as the best part about finishing a test is being able to go home. The proctors also collected our scrap paper, which was mildly upsetting since I’d written a poem on mine.

Inconveniently, the next day I made the trip back to Juvisy-sur-Orge back for the oral exam. In this section of the test, you pull two topics at random then choose one to present. I knew I’d be given twenty minutes to prepare, which felt unnecessarily long, especially given my confidence speaking French.

But once I’d chosen the topic of online versus in-person tutoring and sat down with scrap paper, I realized I had no idea what I was supposed to do with this paragraph of information. In a moment of un-prepared panic, I stopped the proctor as she was leaving the room, and asked her to clarify. She explained that I was supposed to present this topic then be prepared to debate it with the examiners. I ended up using the full twenty minutes to make sure was absolutely clear on what the text was saying and write out arguments for different methods of learning.

The preparation time and idea of having to debate the topic made me nervous but as soon as I started talking, that all fell away. One woman asked me questions while the other took notes and occasionally interjected. Their questions were easy to understand in the context of our conversation, and I talked through the different arguments.

Near the end of the exam, my interviewers asked where I learned French and how long I’d been studying. I explained that I started in middle school and had more or less continued ever since. Only when they complimented my French did I realize that the oral part was over, and they’d been impressed by my language skills. It was an affirming moment after two days of RER rides and fussy testing requirements.

My main lesson was to give myself more time to find a test center that was easy to access and easy to work with. In retrospect, following Stephen’s lead and applying via the internet would’ve saved me many headaches. Also, confirm that the registration address is the same address as the test center. I’d also recommend taking two practice tests that are current, and having a clear understanding of all the instructions before showing up. Other than that, the process was quite straight forward, and I’m happy to have a proof of my French proficiency to add to my resumé.

Photo is of my certificate: one more for the wall!