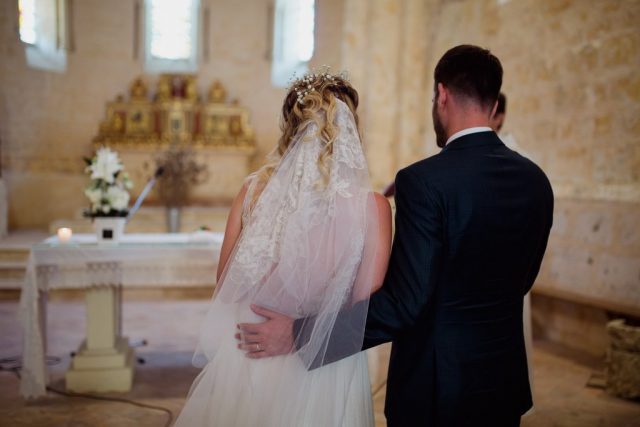 If you’ve been following along as I share more about the life I have created for myself in France, you know that I got married (civilly) last March. It was a major step in my personal life as well as my administrative life here in Paris. In the most literal sense, the French government has been very much involved in my relationship. If you’re not in an intercultural relationship like I am this may sound odd to you. For my fellow cross-continental couples, I’m sure you get it.

My now-husband and I had to make a lot of serious decisions somewhat early on in our relationship. When my student visa was about to expire, we had to decide whether we were “for real” or not. We always knew that we didn’t want to do long distance for a variety of reasons. In order for us to be able to legally live in the same place, I needed to figure out my visa situation.

We decided to get married: we loved each other and knew we wanted to stay together forever. It would also enable me to get the vie privée et familiale (VPF) visa, which would allow me to live and work in France. Eventually, I do plan on getting French nationality, but it’s a long process that I’m not quite ready to embark on just yet.

You can read all about how to get married civilly in France in the article linked above, so I’ll give you the TL;DR version: you have to gather a lot of paperwork, head to your local town or city hall (la mairie), make your case, and then attend the actual ceremony. It lasts around 20 minutes and it’s legally required in France. Anyone and everyone can also have a religious ceremony if they like, but the marriage won’t be recognized by the state unless you also do the civil ceremony. In fact, you need that marriage certificate to start the religious marriage process (more on that later).

We always knew that we wanted to have a religious ceremony to celebrate our marriage, but with the last few years of lockdowns and border restrictions, it wasn’t possible for my American friends and family to come to France. After two long years of waiting, I got married in the Catholic Church and had a reception with loved ones on June 4, 2022. I wanted to share the process, and what it was like to bring my two (very separate) lives together at the reception.

As a note, the information I’ll be providing is for a Catholic wedding between an American and French person. Other religions or nationalities may require different documents and processes.

So, you thought the document-gathering process was over after the civil ceremony? I hate to burst your bubble, but nope. Luckily, most of the documents required are the same so you shouldn’t have to do much hunting. That said, you will need to provide a few more specific pieces of information before you get started:

For the French person:

You also need to provide your marriage certificate. This is why it’s essential to get married at the town hall before the church. Most people don’t wait over a year to do it as I did, but many do at least a few months before. My in-laws actually did the civil ceremony the same day as the religious one. I suggest that you give yourself at least a few weeks between the two as otherwise, you’ll be setting yourself up for a very long and stressful day. The marriage certificate is the last piece of the puzzle that you’ll need on the actual day of the religious ceremony, and so most parishes are used to receiving this part of your dossier last.

One hiccup that I hit when gathering my paperwork was that I was under the impression that only one of us needed to provide a baptism certificate in order to get married in the Catholic Church. Although I am baptized, I figured it would be one less thing to get translated so I was happy about that. The church where we got married insisted that BOTH my husband and I show proof of baptism for reasons that are still unclear to me. Maybe they just wanted to see what an American baptism certificate looked like? Who knows, but I complied.

Pre-Cana is the preparation process required by the Catholic Church in order to get married. In French, they simply refer to it as the préparation du mariage. It is a long and at times arduous procedure but overall we both really enjoyed it. We were also sponsored by a couple in the church, who happened to be my sister-in-law’s in-laws which made me feel really comfortable.

We were required to attend four meetings:

We also had to meet with the priest who was going to marry us. My husband is quite close with the priest that he grew up going to Mass with and it was really important to him that he marry us. He happily obliged (I really appreciate this priest so I was thrilled as well) and it was decided, he would be there to consecrate our union.

This part was really fun: we traveled down to Lyon where Father lives and stayed with him in the rectory for the weekend. We got our own private room and we shared our meals with the other priests that live there. We also got to explore a new city, one that is lovingly referred to as the Gastronomy Capital of France. Needless to say, it was a great weekend.

Father also worked with us on our lettre d’intention (letter of intention), another essential part of Pre-Cana. I wrote one addressed to my husband and he did the same for me. Inside, we shared our expectations of our union: our hopes and dreams, how we want to raise our children, and what the four pillars of marriage mean to us. It’s private and to be shared only with the couple and the priest. It’s actually legally required for a religious ceremony, but it also holds a lot of sentimental value. We would have written them even if it wasn’t mandatory.

Once you’ve gone through Pre-Cana, the priest marrying you will take care of the rest. He will need to send off your completed dossier to the diocese where you live as well as to the parish where you plan to get married so that it can be verified. You’ll sign another (religious) marriage certificate on the day of your wedding, in front of your friends and family.

Bringing My Two Worlds Together

As I mentioned, we were forced to wait a year and a half after our civil ceremony to get married in the church. I say “forced,” but it was really because my American loved ones weren’t legally allowed to enter France for many years due to border restrictions. As soon as the borders opened back up we jumped back into planning mode: the wedding was on!

Logistically, bringing 30 Americans (who are scattered across the US) over to France was easier said than done. I didn’t get married in Paris, but rather ​​in Mouthiers-sur-Boëme in the Charente department. If you’re familiar with the area, the closest “big city” is Angoulême. It’s a beautiful area (my husband grew up there), but it also meant having to guide folks from the CDG airport, down to Montparnasse station, and then on to Angoulême. Yeah. Easier said than done.

No matter how difficult and stressful the whole thing was, being able to share this day with everyone who mattered to us was one of the most special moments I’ve ever experienced. It was a rollercoaster of emotions: stress (so real I have to say it twice), joy, surprise, grief (for those who weren’t there), relief, comfort, and of course, love.

I never thought I would see everyone I love gathered in the same place; they traveled across continents and oceans and time zones just to be there for me and my husband. It was a lot of work to make it happen, but I don’t regret a single second of it.

Now, I’m starting a new phase of my life in France and to that I say, bring it on.