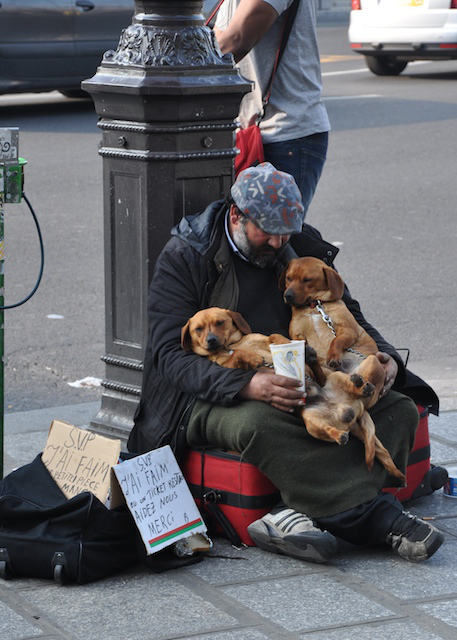 Homelessness is an issue in any big city, but it’s an absolute epidemic here in Paris.  The local phrase translates into English as “sleeping rough,” and from what I can tell by conversing with fellow Parisians, it’s only been on the rise as of late.  Yet, in that recognition, there is a sense that it’s an accepted way of life rather than a problem that will be eradicated anytime soon.

A socialist way of thinking in France ensures a high level of tolerance for homelessness.  People set up tents on frequently traveled streets.  People sleep in store doorways after those stores close, and in subterranean car parks when it’s cold (those places are quite warm), and in the metro (all the time).

The homeless themselves have their own routine.  You can catch them hanging out, reading, or holding puppies, which leads to a 500% increase in the level of donation.  “Oh, you have puppies, so you must need more money,” not, “You’re homeless, why the hell do you have a dog?”

At least once a day someone will get on the metro and make a speech.  They’ll cite children, or being out of work, or some other malady.  They then walk through the car, cup or hand extended.  People will donate mostly on your appearance.  Avuncular and kindly-looking types clean up.  Young and unkempt routinely get nada.  Women are 50/50.  Once they’ve gone through your carriage, at the next stop, they go to the next carriage and repeat the routine.

Buskers (people playing music) get donations purely based on their quality.  There is a guy at Opera who is at the change to the 8 Line every Sunday (that’s the station I change at to go to Mass) who plays his accordion with an amp which distorts the sound and gives nobody any peace for the 3-4 minutes we are waiting on the platform for our train.  I’m too annoyed to donate.  But last week there were these two guys playing acoustic guitar who TOTALLY cleaned up.  This wasn’t just because they were handsome guys playing guitar (surely some scribbled phone numbers were mixed in with those euros), but also because they happened to be GOOD.  They had decent voices and were playing the strummy catchy music you wouldn’t mind hearing on your metro trip.  There IS money to be made in the metro – we always have spare change in our pockets – and unlike in the US where coins are mostly denominated under $1USD, in Europe those coins can be 1 or 2 euros and what can look like a jumble of coins is probably close to (as it looked to be on this night) close to $100USD, ostensibly just in this carriage on this particular ride.

Just last night I witnessed two young lads do a satiric song-and-dance striptease (down to a shirt and briefs from shirt, suit and tie) about ticket inspectors on the Metro.  I might have been the only one who did not contribute – just about everyone else in the carriage did.  Want to make some money on the Metro?  All you need to do is strip in front of the French.  They find it tres amusant, apparently.  The americain was not.

Yet, for all the antics – puppies, begging on trains, etc., the fact that I’ve seen more than one homeless person reading is impressive to me.  It reinforces the notion that maybe this is a “regular person” who is just down on his/her luck, or if not, proof that being homeless doesn’t need to lead to despair.  It might just be another way to be happy with what you have.

Featured photo is from Nando Prudhomme’s site and is used with his permission.  You can find Nando on Twitter @cyanskies and at http://www.cyanskies.com/.