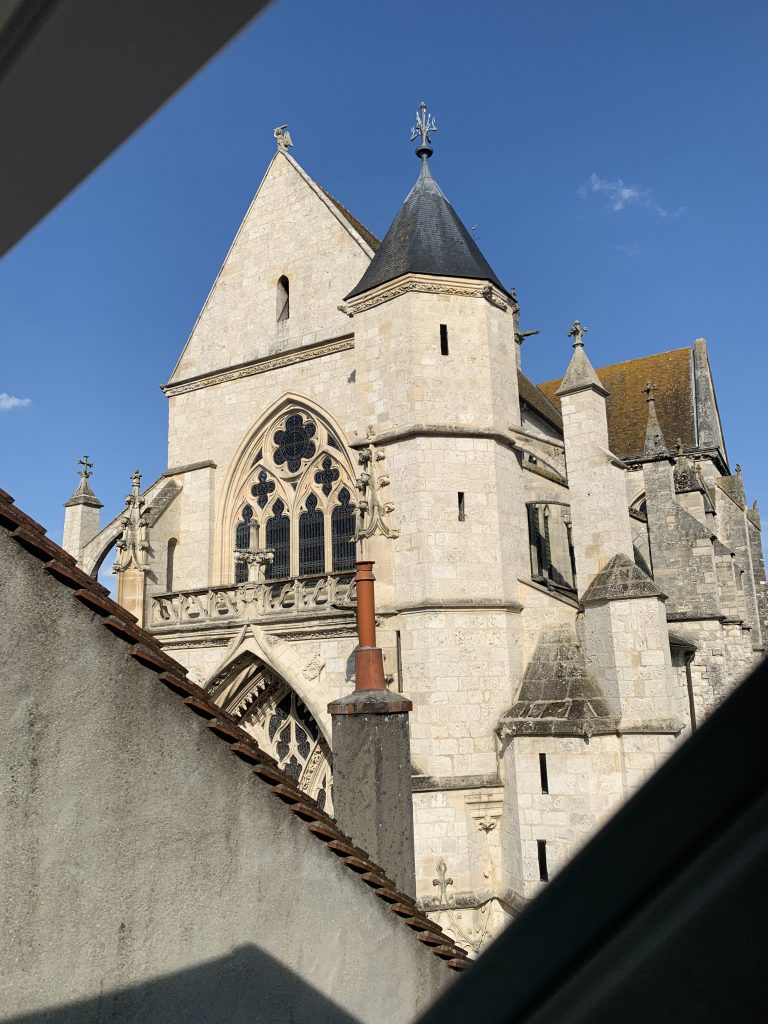 As I mentioned in my Why I Left Paris article, I never planned to leave Paris, and would not have known what a “lockdown” was if you had mentioned it to me prior to 2020.  But in May 2021 I found myself not just moving out of Paris, but doing so during our second lockdown.

Thankfully, this would be one of my easiest moves, not just because I’d previously lived in four apartments in Paris, but because, as always, things really fell into place.  I didn’t even bother to pay to change my address as so much of my French administrative life had become paperless by then.

At first I checked with all the immobiliers (real estate agencies) in Moret.  There are about five, along with a community board near the town hall where you can see listings of apartments.  Unsurprisingly, not all of these immobiliers have websites or if they do, the sites aren’t updated with new listings.  I had to visit the town, look at the listings posted outside, and then make appointments to see apartments.

I managed to view at least two of them.  One was wonderful and perfect for me, but when I submitted my dossier, the owner had already accepted a new tenant without informing my agent, and I had to move on to the next prospect, which was far more dismal.  While viewing it I concealed my disappointment from Margot, the young girl who had shown me both apartments, and told her I would let her know whether I would apply within the coming week (I only took a couple of days to realize I couldn’t accept the layout of the new place, which would require guests to walk through my bedroom to access the only bathroom in the apartment).

Another immobilier requested that I turn in a dossier before I was even permitted to see the apartment.  The owner wasn’t satisfied with my means, and I confirmed by asking around that French landlords don’t really place any merit in your non-French assets and income: they might as well be science-fiction stories.  I’ve purposely kept my French business at a certain level of income, in part to avoid VAT, and as such its income seemed unimpressive to the owner.  A polite non was conveyed to me: I wouldn’t even be permitted to look at the apartment, thank you.

A bit discouraged, I started to expand my search to other nearby towns, including posh Fontainebleau, but even as I planned to stop by Fontainebleau to make the same blitz of immobiliers and their listings that I had accomplished in Moret, I hit upon an idea.

I had hosted hundreds of people over years in Paris as an Airbnb host (even becoming a Superhost) and personally knew that the market had dramatically shifted during the pandemic from tourists to French nationals.  I mused that the effect would have been even stronger in a “day trip” town like Moret and so I did a search of all the listings in Moret and studied their occupancy rates and most recent reviews.

One listing in particular seemed to suit me and I sent a message to the hosts, asking if they would consider a long-term rental.  I did this knowing as a fellow host that the tourist premium which causes a higher nightly rate had mostly vanished in the previous year and when it would precisely come back was unknown.  Why worry about now-uncertain short-term rental cash flow when you could have a reliable tenant?

My gambit paid off and the hosts agreed to meet me the following week to show me the apartment.  A charming penthouse at the top of a two-story townhome, located across the street from a church consecrated in the Middle Ages, the space was perfect for me, and I told the potential landlords so at once, refusing to play any sort of negotiating games.

I wanted a long-term lease right away, and they agreed to a three-year one.  My landlords-to-be were a young couple who had met on a work-abroad program in America, and they enjoyed switching between English and French while we worked out what was to be done with the furniture already in the space (I would move most of it downstairs to the shared cave, a giant unfinished community basement) and when the lease would start (I wanted to give my current landlady the maximum amount of notice, as I knew she planned to sell the apartment if I ever decided to move).  We eventually settled on May 1 and since we agreed to this at the end of January, I had about 90 days to pull off the move, plenty of time by Paris standards.

I started my adventure in Paris in 2013 in 6 square meters, then moved to 8 square meters, before a three-year stint in the 2nd, at what was then an enormous 39 square meters.  My last apartment in Paris, in the 19th, was 53 square meters and had two bedrooms, so a few things would need to go so I could fit into my new 23 square meter space in Moret.  Thankfully, the Internet helped, and I sold hundreds of euros of furniture, linens, and appliances on LeBonCoin, Facebook Marketplace, and Nextdoor.  Almost all of the buyers came to the apartment to pick up the items themselves.

In a city like Paris, there really is someone who wants pretty much anything decent you are selling (I even sold the planter boxes for my windows!).  The key to selling on these platforms is replying early and making an appointment with the potential buyer as soon as possible.  While the number of tire-kickers and those who will ghost you after showing a lot of interest is not insignificant, I had generally good experiences and sold 95% of what I wanted to, leaving the rest as “gifts” for the future owners of the apartment, who were likely to gut the place anyway (it seems everyone in France wants to completely makeover any apartment they buy).

I rented the largest moving truck I could find (I sold a lot of stuff, but I still had plenty of books and furniture that were going to come with me) and a couple of friends were kind enough to take a day off and help me load and unload the truck.  I finished up the following day on my own and then set about unpacking.  I had set up internet service and electricity weeks before so what remained was getting some shopping done (the markets are much bigger and feature cheaper pricing outside Paris) and taking a few walks around the town that was the center of my new French provincial life (one of my sisters, Clare, insists on referring to Belle’s song from Disney’s Beauty and the Beast to refer to my life now 🙂 ).

While all moves are tiring, I don’t think the momentousness of this move really hit until a week later, as during the move I was on autopilot knocking out tasks one after the other.  My previous Paris moves, believe it or not, had all been executed using the Métro, and all but one of them were pulled off solely with multiple suitcases.  I hadn’t acquired furniture and appliances until my most recent move to the 19th.

My French adventure was still continuing, but I had started a new, non-Parisian chapter.  I could still easily get into Paris 3-4 days a week (and have continued to do so) but I also appreciated being off in the countryside, by a river and a canal and a forest, in a town of 4,000 people.  Life is slower, less expensive, and friendlier.  My dry cleaner always wants to chat when I drop off shirts, and I dutifully wait outside while she catches up with other customers; I’ve even seen the local bus slow to a stop while the driver chats with a friend through his window for half a minute (or longer: no one honks at a bus).

But a near-decade of living in France meant that I had the experience to pull this off during a lockdown (which ended up causing no practical difficulties), by reverse-engineering Airbnb (because the “regular way” wasn’t working), while covering almost all of my moving costs by selling stuff I no longer needed (with just a little extra effort on my part others could find a good use for these items).  It was a dream exit to one of the happiest periods of my life.  Yet, a year on, I wonder if I haven’t entered an even happier one.

Photo is the east-facing view from my apartment in Moret.

5 thoughts on “Moving to Moret (During a Lockdown)”